Is Father Junipero Serra pointing at the trails in the SF Watershed over and on the other side of the ridge line that should be opened to the public?

Probably not, but that is one of the great beauties of art, to be able to interpret.
One thing is clear, this rest stop and monument is a great place to get a view of Crystal Springs and the SF Watershed. This is a nice place to stop, and take in the view. 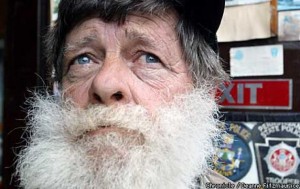 San Carlos resident Louis DuBois personally designed and financed the statue’s construction in 1976. For many years this rest stop was taken care of by Jerry Morissette who lived on the property and took care of it. Jerry moved into the rest stop in 1990 and was credited with for turning a place once notorious for sexual pickups, drugs and vandalism into a safe, immaculate place renowned for bouquets of flowers on the restroom sinks, well-tended flower beds and his own friendly presence. After living there for thirteen years Jerry was evicted in 2003. (UPDATE Aug 2014 from Gary Richard from Mercury News HERE)

After being closed for two years, in 2011 the “Father Serra Rest Stop” reopened with a face lift including new bathrooms and vending machines. Also a ramp accessing people in wheel chairs access to view the Father Serra statue up close.

Certainly the artistic value of this place has been hotly debated, as the legacy of Father Serra himself. We wonder how the Ohlone people feel about the name of the monument “Bay Area Discovery Site” on Sweeny Ridge, documenting where Father Serra first saw the Bay coming over the hill from Pacifica. 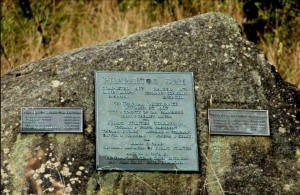 Historical sites are not available to the public even though they are on public lands. Lake Pilarcitos

That said, we cannot change history and there is a lot of evidence that Father Serra was a pretty decent guy. Especially considering the fights he did to shield Native Americans against the Spanish Military during their process of acculturation that he was an integral part of in California. He also took a collection and raised $137 for George Washington during the revolutionary war.

Dr. Iris Engstrand, professor and chair of the Department of History at the University of San Diego described him as “much nicer to the Indians, really, than even to the governors. He didn’t get along too well with some of the military people, you know. His attitude was, ‘Stay away from the Indians.’ I think you really come up with a benevolent, hard-working person who was strict in a lot of his doctrinal leanings and things like that, but not a person who was enslaving Indians, or beating them, ever….He was a very caring person and forgiving. Even after the burning of the mission in San Diego, he did not want those Indians punished. He wanted to be sure that they were treated fairly…”

Whatever your take on Father Serra, what is not debatable is that he is an important character in our regions unique history.

We hope that if Father Junipero Serra was with us today, he would be in favor of the public’s right to hike and cycle in the SF Watershed.

An update on where is Jerry Morissette from Gary Richards of Mercury News on August 31, 2014….

The man who became the savior of the Father Serra rest stop on Interstate 280 near the Crystal Springs Reservoir has lung cancer and says he has been given six months, maybe a year, to live. He broke the news to me a few days ago after going to the VA for a checkup, complaining of shortness of breath……
Read more: http://www.mercurynews.com/mr-roadshow/ci_26442902/roadshow-father-serra-rest-stop-savior-given-six