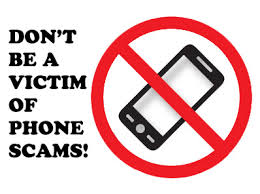 It’s talk around town, people getting tired of bogus phone calls.  And phone scams. Or callers who don’t say anything yet eat up time on your voice mail. Or the phone number shows up as a possible known number but the caller isn’t from the stated company.  We finally took one of our readers question and posted it to our Facebook page and now share those comments. If you have been having similar problems, please let us know by commenting or emailing EverythingSouthCity@gmail.com  We will update this information as we can.

‘Anyone getting spam calls from a 650-271-_____ number? Its always 271 but the last 4 digits keep changing and they keep calling me speaking spanish. Any way to stop this problem?’

Ava Jalapeno Popper Romero  I would sign up to get on the do not call list, I feel the same way, so stay away from spams. they can get you. so that’s what I would do

Debbie Lallas  Yes. Same thing happening at my house. I block one and others keep popping up. No one ever answers when I pick up the phone. And I am on the no call list. Doesn’t seem to be very effective

Jorge Junior  Yeah, answer “Immigration, how can i help you”

Marie Acri-Taniguchi  I am getting them every day and it’s frustrating
Yesenia Valadez  Yes! I’ve blocked them
Audrey Atkinson  Don’t answer the phone please.
Bill Wilks  I don’t answer and let my machine get it. But then they use up 10 minutes of my recording time for nothing. They don’t say anything. How do you stop them? They call many times in a week and I’m tired of it.
Renee Gomes  Yes I get them everyday also and I’m on the no call list?……just getting one now!
Patti Ward  Yes I got a few and have to keep blocking them…I’m also getting friend requests from strangers in SSF. You can tell it’s a scam because they have a fake pic and only 1 friend
Matt Fuentes  Yeah me too…I found out it was from some local hotels room service numbers or something…kept getting orders for egg sandwiches…
Irma Ramos It did happen to me!! Blocked!!
Belinda Perez Skarsgård Do you fill out forms online for insurance, schools and the like that includes your email and phone #? If you do, don’t. Those companies sell/share your information. If you have to, you should maintain 2 emails and numbers- one that you use for such forms (there are online apps that would give you a number that you can check via an app) and another for family friends and anyone impt
Carlos TheDestroyer Solis   Speak spanish
Aly Chan  They sont stop calling I answered its always the same damn automated thing thwn I press one and I tell them to take me off their list or ill report them to the police for harrassment but they just hang up on me. I blocked all the numbers but they keep calling!!
Judy Stone  We have been inundated with these calls too. We keep blocking numbers, but it doesn’t seem to help. Screening every call now, but it’s very annoying!
Denise Lucia Premenko  We have been getting calls from 650-257-3945 for the past few weeks at different times during the day. Called the # back and it says it’s disconnected…… Now blocked!! They are using a 650 area code because they figure most of us who live here will pick it up because it may be an important call…… I am now screening – – If you know me or if it’s important leave a message!!
Renee Gomes  Anyone know how this can be stopped?
Kenneth Buhagiar  Keep an air horn next to the phone and use it. They’ll think twice about calling back.
Owen Lowe  Theres nothin you can do. The worst thing you can do is pick the phone up and ask to be on the DNC list. When ever you sign up with something online or in general us a fake name and put a fake number. I like to use 867-5309. Any how this people us an elaborate scam where they can generate local fake numbers. Just dont pick up. I haven’t picked up the house phone in almost 3 years.
Janette Montano-Vasquez  When they call and you answer just say “I’m done with the job but its a bloody mess” and maybe they won’t call anymore
Moserod OSe  I got caller ID.. if I do not recognize the number I do not answer. the dnc list does not seem to be very effective, and reporting them does not seem to do any good. part of the problem is the large number of spoofed numbers so it might say the call if from for example the Grovner hotel and it is not them. When I get these calls I look the number up of Google and most of the time it is just plain spam, someone looking for any kind of information about yourself that they can get out of you. Best plan is to not answer the phone.

I did a google search of the number 650-257-3945 this is one result….he latest phone scam by the solar energy a**les. Now they are spoofing a person’s name as well as the phone number. They used to use the same spoofed number for a week or more but now rotate out the phone numbers every day or two. Major a**les. NEVER BUY ANYTHING FROM A PHONE SOLICITOR. HELP US MAKE THEM GO AWAY!

Caller: Solar Energy A**lesCall Type: Telemarketer
Bill Walsh  Contact your telephone Carrier, and report the number(s).
Luke Ryan Sauer  Ha I get that too it’s funny
JoAnn Willis  I had 2 calls from russia. Ug.
Pati Dentice Grossman  I get them everyday too. We ALL need to start complaining to our state politicians to get them to do something.
Barbara Demattei  Caller ID helps – If I don’t recognize the number, I don’t answer – get many many calls every day – annoying! There must be a way to stop this harassment!
###
ADVICE FROM PD – NEVER GIVE OUT PERSONAL INFORMATION OVER THE PHONE.  While we don’t know what can be done about this, we do know sharing information may help some folks. And we will update on this subject as more information becomes available.
One of the culprits is often SPOOF CARDS ‘Disguise Your Caller ID’  ‘Caller ID spoofing technology allows a user to change the caller ID to show any desired number on a recipients caller ID display.’  This is how one company advertise:

They’ll never know it was you! Pick a new fake number before you call. They’ll see the new number instead of yours. They’ll pick up thinking you’re someone else!

Who was that?! Adjust one setting and you’ll instantly change your voice to sound way different. You’ll fool your friends and family into thinking you’re another person!

Make it more realistic! Want your spoof call to sound like it’s coming from a nightclub, or in traffic? We’ve got you covered!

Get the proof you need! Need to catch a friend admitting they owe you money? Record your calls to keep backups of all your conversations!

Multiply the fun! Add multiple people to the call for more effect or add someone to listen in on the hilarity.

3 comments for “Neighbors tired of phone calls from fake callers”