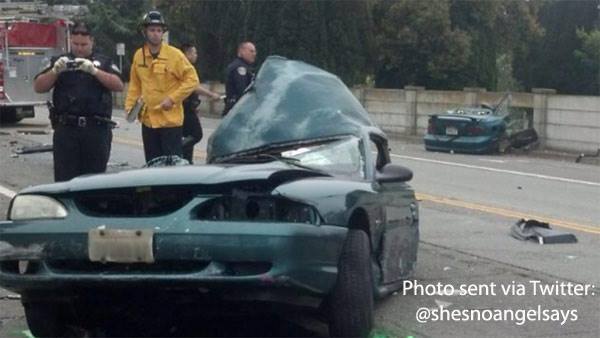 Paul Diaz was convicted and sentenced to 15 years in prison for the drunk driving deaths of his three friends; RIP Rosa Maria Falla, Jonathan Jade Mouton, and Ruvin Abel Vasquez.

Yet today the courts have sentenced Daly City’s Paul Diaz to 15 years of prison for the horrific drunk driving accident that took the lives of his 3 friends back in May 2013.

Rest in peace Rosa Maria Falla, Jonathan Jade Mouton, and Ruvin Abel Vasquez. Tragic and senseless unless we remember them. Honor them.

On May 27, 2013 Diaz crashed his Mustang into another car and then into a retaining wall on Hillside Blvd, up there next to the Cemeteries. He lived, his friends who were passengers, died.

It’s senseless. It’s empty. There is nothing that can bring them back or change the lives of anyone that was touched….. but maybe we can take this tragedy as an example, a reminder.

And the problem sometimes is, we don’t know if we’ve had too much to drink AFTER we’ve been drinking. Our decision making abilities are impaired.

So in honor of those who die needlessly every day – designate a sober & responsible driver BEFORE you go out.

Do it for Rosa.

And yes, for Paul.

This didn’t have to happen and we can prevent the next tragedy.

Make the pledge now to designate before you go out.

Everything South City had information on this tragedy soon after it happened with neighbors posting on our FACEBOOK page with updates. To see more on that CLICK HERE