South San Francisco AC Men’s Soccer Team is just a few weeks away from beginning their 61st season of play in SSF and their 57th season in the Peninsula Soccer League.

The team is coming off a 2nd place finish in the Major’s Division of the League, which is the top division in the PSL. SSFAC was originally guided by South City soccer pioneer and icon, Alvaro Bettucchi, and is one of, if not the oldest clubs on the Peninsula. Mr Bettucchi was also responsible for starting High School soccer in San Mateo County, when be coached the Varsity South San Francisco High School Warriors in 1960, leading to the start of the old North Peninsula League.

The current SSFAC team is looking for sponsorship help, and hopes that fans will come out to support the club when play begins. Unfortunately for the first time in our 61 year history, the team will be playing all it’s home games outside of South San Francisco. The grass fields are not in good playing condition and with the severe drought currently in place, there is not much of an alternative.

It was hoped that the club would be able to play their “Home Games” at either El Camino High or SSF High on the new turf fields. This is something we have been waiting for, for many years. The cost to rent the field is not reasonable and the additional cost of a staff person / custodian has priced us out of the market. We have no problem paying to rent the field, but not at the current cost.

SSFAC will play their “Home Games” at Burlingame / Aragon and San Mateo High Schools. We hope to have a successful season both on and off the field and we appreciate everyone’s support. Please check us out at www.ssfac.org and we will keep you posted on our 2014-15 season 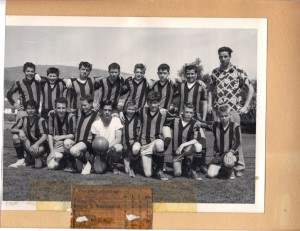 It was 1954, soccer in San Mateo County was in it’s infant stages, and South San Francisco AC was beginning their long storied history guided by their original coach and soccer pioneer, Alvaro Bettucchi. After playing in various leagues and exhibition competitions, SSFAC joined the Peninsula Soccer League in 1957 founded by National Soccer Hall of Famer Umberto Abronzino, and now the team is preparing for it’s 58th season in the PSL and it’s 61st season of playing soccer in South San Francisco. After finishing the 2013-14 season in 2nd place in the Major’s Division, SSF’s first season in the PSL’s top division, they will look to challenge for the title when play begins on September 21st.