NOTICE IS HEREBY GIVEN that a Draft Environmental Impact Report (EIR) has been issued for public review and comment by the City of South San Francisco Planning Division on October 10, 2014. The Draft EIR is for the implementation of the proposed South San Francisco Downtown Station Area Specific Plan and related General Plan and Zoning Ordinance

A 45-day public review period has been established for the Draft EIR. Following the close of the public comment period, responses to comments on the Draft EIR will be prepared, and, together with the Draft EIR, will constitute the Final EIR. If you wish to challenge the City’s action on this Draft EIR in court, you may be limited to raising only those issues you or someone else raised at the public hearing, or in written correspondence delivered to the City of South San Francisco Planning Division during the public comment period. This notice is required to be filed with the County Clerk’s office for a period of not less than thirty 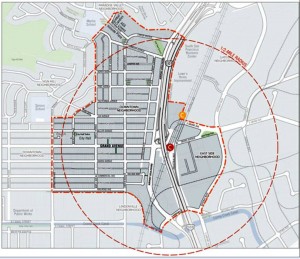 PROJECT LOCATION: South San Francisco lies at the northern end of San Mateo County and is bordered by the cities of Brisbane, Colma, Daly City, Pacifica, and San Bruno. South San Francisco is 9 miles south of San Francisco and abuts the San Francisco International Airport (SFO) at the south-east boundary. The area covered by the Specific Plan is defined by a 0.5-mile radius around the Downtown Caltrain Station, which is located slightly north of the Airport Boulevard and Grand Avenue intersection and below the U.S. Highway 101 (US101)-elevated segment and the Grand Avenue overpass. The 0.5-mile radius was altered somewhat to exclude lower-density/hillside residential areas in the north and west where no change is proposed or appropriate, and to exclude areas east of US101 where newer commercial uses suggest no change is likely during the time period covered by the Specific Plan. The Specific Plan boundary includes the South San Francisco Caltrain Station and the majority of commercial and civic development in the City’s Downtown neighborhood. A portion of the Specific Plan extends east of US101, encompassing an older industrial neighborhood directly to the east of the Downtown area (Sylvester/Associated Rd), but excludes the majority of the existing office development east of US101 and the Gateway neighborhood. The study area is generally bound by Hillside Boulevard and Linden Avenue to the north; Gateway Boulevard and Dubuque Avenue to the east; Railroad Avenue and Canal Street to the south; and Spruce Avenue and Maple Avenue to the west.

PROJECT DESCRIPTION: The proposed South San Francisco Downtown Station Area Specific Plan and related General Plan and Zoning Ordinance Amendments (“Plan”) will guide the City in its planning efforts to create a vibrant, transit-supportive, diverse Downtown, particularly the area surrounding the City’s Caltrain commuter rail station. The Plan will craft a vision for the Downtown core, and identify an implementation process to achieve the City’s and the community’s goals, including design standards and regulations for future development. The Plan will support transit-oriented development (TOD); create an open space framework; create pedestrian linkages, lanes, and a pedestrian-priority zone; create a new bicycle network; and employ new parking strategies. Assuming that 25 percent of the parcels in the study area would be redeveloped over the lifetime of the plan, the Plan would accommodate a net increase of approximately 1,435 dwelling units, 0.8 million square feet (sf) of commercial uses, 21,000 sf of industrial uses, and 1.2 million sf of new office/research and development uses.

PUBLIC HEARING: The Planning Commission will hold a public hearing to take comments on the Draft EIR on November 6, 2014 at 7:00 PM in the Community Room in the Municipal Services Building at 33 Arroyo Drive, South San Francisco, CA. At that time, any person may be heard.

More information on these plans can be found HERE

Meeting to be held at: 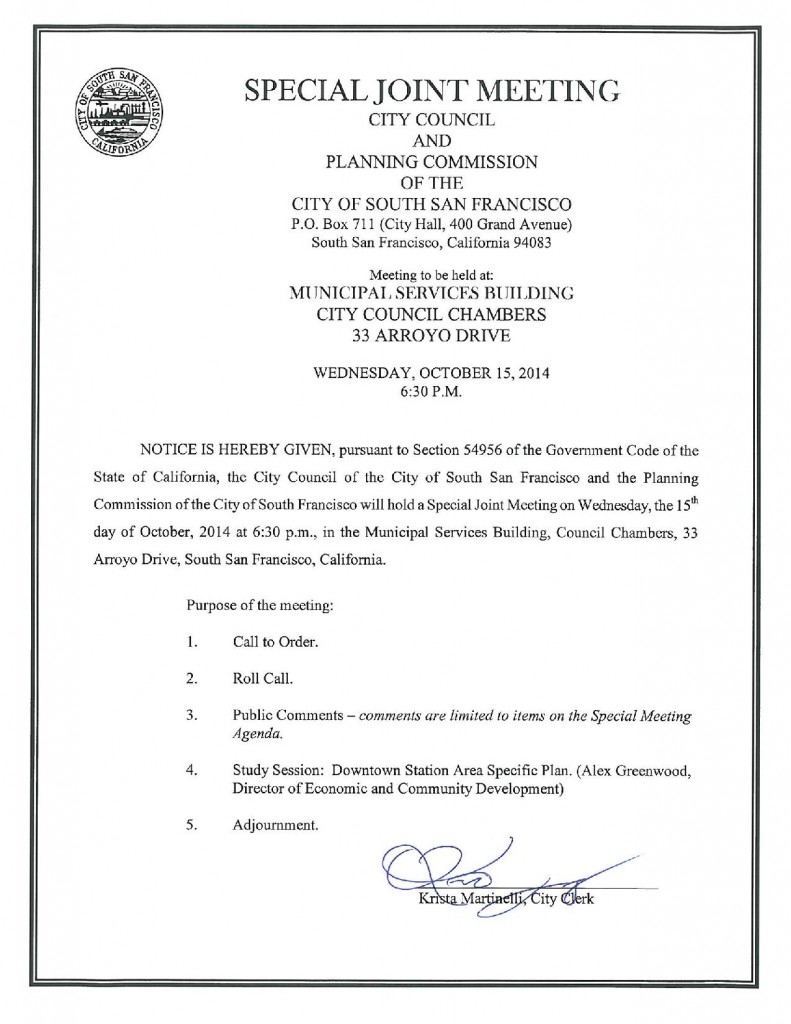 UPDATE: MINUTES OF THIS MEETING CAN BE