Educating students on the importance of fire safety and prevention, South San Francisco Fire Department visited twelve elementary schools during the month of October for Fire Prevention Month. Since October 1, fire personnel provided live demonstrations to over 3,900 students in South San Francisco, simulating potential emergencies for students and familiarizing them with common firefighting equipment used during search and rescue operations. 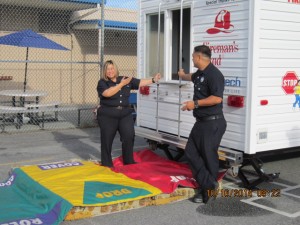 “We want to familiarize kids with our fire personnel and equipment,” says acting Fire Captain Devin Flannery. “In an emergency situation where there’s a fire on the other side of the door and parents are nowhere to be found, children have a hard time trusting anyone, let alone someone breaking through doors while wearing protective goggles and a mask. By having our staff wear firefighter suits during demonstrations, we can give them a reference point and more importantly, someone to trust during those stressful times. When they realize that they’ve seen us before, say during a school demonstration, they’re more likely to cooperate and let us do our job bringing them to safety.”

The theme for this year’s Fire Prevention Month was smoke alarms. Fire personnel provided demonstrations about replacing smoke alarm batteries and identifying smoke alarm noises. Firefighters also presented on smoke detection, identifying the signs of an indoor fire and recognizing next steps in the event of an emergency.

For each elementary school, the Fire Department administered twelve live demonstrations in two sections, an indoor assembly and an outdoor assembly.

The indoor assembly included a simulated scenario involving a bed, a door, a mat, and a mailbox. Using props, student volunteers learned how to roll out of bed, crawl to exits, and feel for heat before opening the door to meet at a designated location outside. 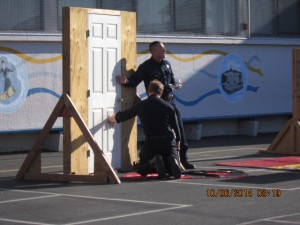 The outdoor assembly included fire equipment demonstrations, a window prop, and a Smoke Trailer, which simulates a smoked-out house. Students learned how fire equipment is used, how to get out of a burning house through the window, and what to do in case the house is covered in smoke. Students also learned to cover faces prior to stop, drop, and roll.