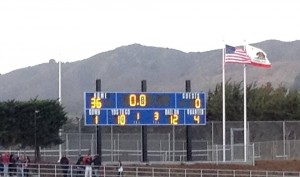 If sports are a microcosm of life, the El Camino High football team did a lot of living this fall.

The Colts lost a head coach due to criminal allegations, program members were alleged to have participated in racially based hazing (a charge those affiliated with the program dispute), the team was beset by injuries, and — to top it off — rival South San Francisco High shut out El Camino, 36-0, in Saturday’s Bell Game.

But if you ask Eric Jacobson, who took over the program in the fourth week of the season, the adversity the Colts faced this season will make them better men in the long run.

“They learned a lot about life this year … these guys were reading stuff in the paper that was not true. It kind of gave us a black eye, but I really think it made us stronger,” Jacobson said. “The guys should really be commended for the effort they made.” 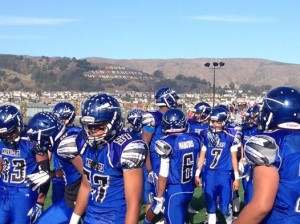 On Saturday, however, it was the Warriors who seemed to put out the most effort. The tone was set early. El Camino went three-and-out on its first possession, then South City started its drive on its own 46 yard line. On his team’s second play, Eric Kamelamela took a handoff and busted out a 49-yard run up the right sideline for a score.

“I was just doing it for my team; it was the Bell Game,” Kamelamela said. “I think it set the mood for the rest of the game.”

The Colts again went out on downs on their next possession, in fact El Camino punted five times in the first half to just once for South City. The Warriors took advantage and showed a little trickery, scoring on a 40-yard running back option pass from Tommy Miller to Jose Galban with 2:48 left in the first quarter.

“The (South City) quarterback doesn’t throw the ball very often — it’s the backs and the other people,” Jacobson said. “That’s why those plays are so good; you’re focusing on the running back so much.” 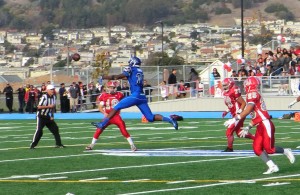 South City’s Terrell Townsend knocks down a pass from EC’s Andrew Pierotti late in the first half.
Photo by John Baker.

“It feels great to win,” Galban said. “We executed today and played very well — that’s what we were planning to do all season.”

South City (4-6) got two more rushing touchdowns in the second quarter, one from Cesar Torres (two yards) and the other from Kamelamela (eight yards). The Warriors took a 29-0 lead into halftime, having outgained the Colts 248-24 in yardage at the break.

El Camino (3-7) stepped up better in the second half, with Jaqari Taylor and CJ David pulling down interceptions. But South San Francisco also put up an effective defense, with Galban pulling down an interception just in front of the goal line late in the third quarter to kill EC’s best scoring chance.


After South City’s Mauricio Mabutas ran the ball in 16 yards for a touchdown with 8:21 left in the game, making the score 36-0 after the extra point, the contest transitioned to a running clock, and the Warriors’ victory came quickly. 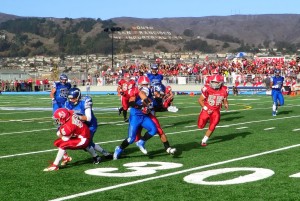 South City’s Eric Kamelamela is brought down on a run during the first half of the 2014 Bell Game.
Photo by John Baker.

Kamelamela, just a junior, led all rushers with 21 carries for exactly 200 yards. Teammate Alex Benevides had 67 yards on 11 carries. Terrell Townsend had two sacks defensively for the Warriors. El Camino’s longest play of the day was a 33-yard pass from quarterback Andrew Pierotti to Anthony Graham.

Jacobson, who started his second stint as the Colts’ head coach midway through this season, hopes to return next season to give the team stability.

It was South City’s 11th straight Bell Game victory and 43rd overall in the series.