In memory of Oliver Oliveros 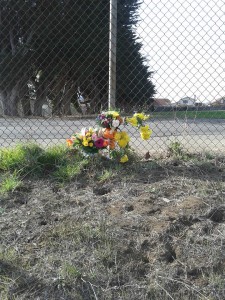 On Monday November 10th Oliver Oli Oliveros, a 43 year old South City resident, who was graduated from Parkway & South City High, sadly appears to have died. John Cain shared this information with us, that a man had been found dead in his car parked on Eucalyptus near Parkway Heights Middle School.  We later learned this was Oli Oliveros and the community responded with comments of condolences and disbelief.

Brian Jenkins provided us with service arrangements as follows:

His passing has been felt even by those who did not know him as is evident in the comments left by those in our city:

Brandie Nunziati shared this photo of flowers yesterday  ‘I don’t know much but I do know a man in his 40’s wasn’t feeling well, pulled over and passed away near Parkway Middle School.. RIP and condolences to his family’

Lowell Jimmy Seen it the other day when picking up my kid. Kinda looked like what might have happened. Sucks.

Gina Alasandro Albert Rios what was his name?

Dawn Tentes Rip oil!! you were my brother oli the whole group is!! miss you bro find mom and grandma and everyone else! I have another angel in the sky!

Karlye Catanzaro Lawhorn Devastating breaks my heart!! He is another precious angel!! RIP

Fabian Miranda I remember him from Parkway and SSFHS he was such a nice guy to me and everyone around him. Rest with God Oli!!!

Monica Ratcliffe Munoz RIP Oliver Oliveros!! You will be missed!

Marie Smith May he rest in peace!! So sad!

Margaret De La Cruz So sad, my deepest condolences to the Oliveros family

Teena Rodriguez So sorry to hear of his passing. I don’t remember him, but I do remember Hestia (sister)

Shane Kinoshita I went to school with Oli, he was a real good dude. He will be missed by many.

Meg Simi so sad, prayers are with his family.

Dawn Tentes Rip my brother oli!! Another angel for me!

Olga Mosqueda Patino May he rest in peace. Prayers for his family and friends.

Barbara Demattei RIP Oli. My condolences to your family.

Tina-Marie Mason Oli was a brother to all. He had the biggest heart and the best smile and laughter. You will be truly missed my friend.

Ricco Thompson Sr. I went to Parkway with him and I also worked with him at a Baking Company in South San Francisco as well we were drivers it was fun working with him we had a good time rest in peace my brother

Christina Barnett Haas Oh my RIP!!  I was wondering what that was for as I dropped my son off at Parkway the last couple of days driving past. So sad to hear

Deborah Mcgrath So sorry for his family

Ben Williams Damn,Damn!!!, was 1 cool dude, RIP brother you will be missed

U Da Bot You are missed by is all already.

Albert Rios to  Gina, we went to Parkway with him… He lived down the  street.