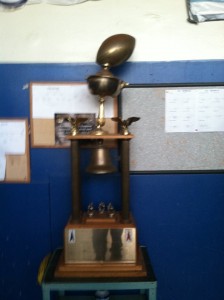 The prized Bell currently sits with the Warriors. Where will it end up Saturday night?

Let the GAMES begin this Saturday at 2pm on the new Clifford Field at South San Francisco High School as our two High School teams rival for the BELL trophy.  Fifty-three years and this tradition continues to bring spirit through out our city as neighbors cheer for their home team.

For those who have not yet purchased tickets you can do so by CLICKING HERE.

What a steal of a deal to watch our BELL GAME in action!

For those who cannot make the game you can still watch it LIVE thanks to  NFHSnetwork SSFHS Video Art Program (Day Pass to watch the game is $9.95 or stay up to date on all SSFHS LIVE events for only $119.95 for 12 months!) More information on their site CLICK HERE.

This past week we have watched our SIGN HILL continue to go through the colors of blue and red, symbolizing the South City Warriors and the El Camino Colts. However the orange SF remains in honor of our SF Giants World Series win. We can expect the city to have this removed and painted back to our basic white in the near future and we encourage neighbors not to re-paint any of our letters afterwards. Well until next year anyway, right?  Thanks to our neighbors for taking photos and sharing them. 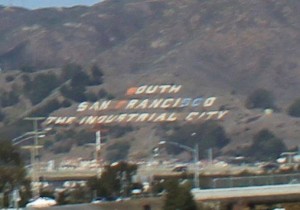 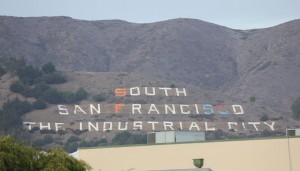 Later that day we can see evidence of El Camino Warriors attempting to claim the C in red.
Photo: Dan Ullman 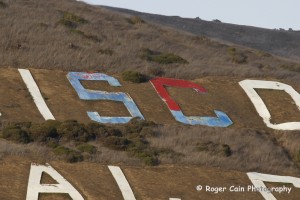 A closer view from our professional photographer ROGER CAIN 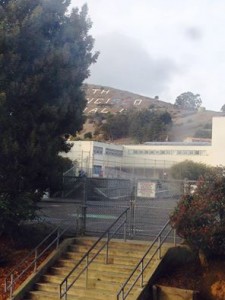 And a bit of the ribbing that always takes place between cross town loyal fans:

Marlen De Avila The SC was painted blue for the South City Warriors, then El Camino High students painted over it with Red. It’s all for the Bell Game this Saturday, a big rivalry in High School Football. El Camino should’ve painted the E & C in City, but that’s ok Warriors are still gonna WIN! GO WARRIORS!!!

Vinny Vance I think the rain interrupted their painting party…

Carlos TheDestroyer Solis That sign belongs to the original South San Francisco School. El Camino cannot even see that sign. There is a large rock that is close to El Camino high school they can spray on that rock. That rock is theirs

Pauline Garcia ^^^^^^lmao….that rock is theirs… sending the SC WARRIORS A HUGE SHOUT OUT from sacramento CA…. #SOUTHCITYBORNNDRAISED

Elisa Nunez Paint them all blue

Dustin Walsh I thought it was some dodger fan from so cal upset & painted them blue. It upset me. I’m not a true local so I didn’t realize that the Bell game is this weekend. That makes it all better

Noel Antonio Arauz I heard Stanford and Berkeley used to paint the letters Waaaaay back, but i don’t know how accurate that is

Deb Wilborn Love the tradition, but who buys that much paint?!?

Jason Basquez What is the record at now? Who is holding it down? Graduated in 99′ Oh yeah #GOWARRIORS

Tony Alejandre The Bell stays where it has spent the majority of its lifetime with South City!!

Jasmin Sutter Is this even a question? SOUTH CITY!

Davida Dean How many times have those baby horseys actually taken the bell? Just remember when you go into battle…Warriors ride on TOP of horsesys….

Glen Wandersee I dunno,but it looks like the Tower of pisa,is it suppose to lean like that?

Alan Lopez Lolz south city is like the sf giants of these two schools And elco is the dodgers. Who do u think will win

Yeyo Sanchez South City should… but crazier shit has happened. Whose gonna streak this year?

Tony Alejandre The year we went undefeated was the last Friday Night Bell Game!! They should bring it back!!

Tina Brusuelas Campbell It is on Saturday..

Sandra Luna That’s been around for yeeearssss! Glad to see it’s still up for grabs.

Darcy Kastell WARRIORS ALL THE WAY!!!

Abiel Christian Alesana Obviously South City is going to win. El Camino hasn’t even felt the trophy for over a decade now. They’re probably going to run the same I-Formation plays they’ve been running. Time to put El Co in the ground again. I wouldn’t really call it a rivalry. It sort of a tradition with the amount of times South City has won the Bell.

Kathleen Bomben Sartin It’s yours COLTS. GO GET IT!

Katie StokesAdam Stokes when did you guys win the bell?

Katie Stokes Didn’t south city cry and start a fight then blamed it on you?

Doug Donegan Can somebody at least just polish the darn trophy this year??

Cathy Mueller Im a colt parent. It is what it is, so may the best team succeed. No fighting or bashing schools or putting our kids down, just good old fashion clean fun.

Smith Jack Once a Warrior – always a Warrior (’56)

Joey Moro El Camino never beats us get over it

And the tradition continues…

today bell game was wired this year with both teams clearing the slides lines there were a lot of ejections in and fighting the third quarter it remind that when there was a fight in the glove game. i hope sc will lose the glove game

It was my first time watching a Bell Game & I must say I was a little disappointed in the way the players treated one another. SSF vs. El Camino what happen to inflicting good sportsmanship into the young adults of today? It was like a war zone. We are both from the same city & we are fighting one another. If that is what the children are learning from now what happens when they enter the real world?? I think both schools should have a friendly gathering to meet one another so that they actually play football the day of the bell game & not have a boxing match. I was embarrassed to see such violence. Shame, Shame, Shame