In Assemblymember Mullin’s new leadership role, he will preside regularly over floor sessions to ensure bi-partisan cooperation and civility in the business before the full Assembly floor. He will also be responsible for making rulings on parliamentary inquiries and points of order, as well as ensuring smooth operations as the Assembly takes up new bills in its upcoming session.

“I am deeply honored by this appointment, and grateful to Speaker Atkins for her confidence in me to assume this key role,” Mullin said. “I believe the Assembly, both Democrats and Republicans, can demonstrate to other states and to the country for that matter, that civil discourse and bi-partisan cooperation is alive and well in our chambers as we debate and deliberate the business of the people of California.”

Assemblymember Mullin will remain on the Budget, Revenue & Taxation, Business & Professions Committees, and has requested to sit on the Assembly’s Elections Committee. Most recently, the Assemblyman authored numerous bills to reform the elections process, including AB 2028, which enabled San Mateo County’s participation in an all Vote-by-Mail elections pilot program. Assemblymember Mullin remains Chair of the Select Committee on Biotechnology, as Assembly District 22 includes South San Francisco, the Birthplace of Biotechnology, and home to more than 100 biotechnology companies. 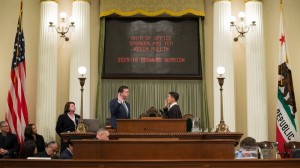