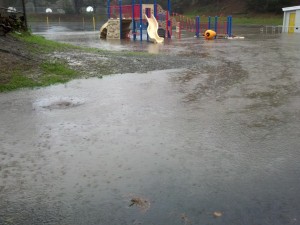 Monte Verde Elementary School on McCloud Drive in San Bruno sustained some moderate damage due to last week’s storm. The school is part of South San Francisco’s Unified School District and has historically been prone to flooding. Second grade teacher Clare Gallagher reported eight class rooms had water, including those newly constructed. “Three second grade rooms, four first grade rooms and the Exploratorium which is used for science, art, and music were flooded” Gallager said. “The second grade rooms had at least two inches of water throughout”

An emergency School Board meeting was held on Thursday December 11th resulting in an unanimous vote to close all campuses in the SSFUSD the following day, with custodial staff remaining on duty to monitor any damage that might occur. “Our staff was aware of the history of flooding and in advance of the storm had done a tremendous amount of work in clearing sewage drains and cleared loose debris from all of our sites to address any potential hazard”  School Board President Maurice Goodman said. “There was significant runoff from the park above the school in San Bruno and the amount of wind and foliage that clogged our drains and constant rain in a short period of time made for a perfect storm  (no pun intended) that caused the flooding on site and damage to the classrooms.”

“The District would like to thank maintenance/operations staff and Bond team staff for their preparedness and immediate response to flooding issues as they developed.  Due to their commitment, the impact of the storm on district schools was minimized.” Associate Superintendent Patti Ernsberger said. Goodman stated there  should be little to no permanent damage.

While immediate action after the fact is important, it is equally important to understand why this school continues to flood even though new drainage had been included as part of the new building construction. Multiple factors seem to be responsible for the continued flooding: Debris clogged drains that had been cleared prior to the storm, more drainage may be needed, and the reported run-off from San Bruno Parks above the school site.

Ernsberger reported the construction contractor was to discuss options for adding some additional drains that would help mitigate this in the future.”When the site was visited on Thursday morning, the drains were clear so the limited allotment of available sand bags were allocated to other flooding areas.”

San Bruno City Manager Connie Jackson said she was unaware of the damage at Monte Verde School.  “I have asked our staff to advise me of any information they might know about the reason for the flooding.  While we did have several areas of San Bruno that were impacted, I did not receive any specific report from our staff about flooding at this location”  she told us.

Ernsberger said “We have not yet had discussions with the City of San Bruno regarding the run-off but plan to meet with them as discussions for mitigation move forward.”

Some of the flooded classrooms were recently constructed as part of the Measure J $162 Million Bond that South San Francisco voters approved in the 2010 election.