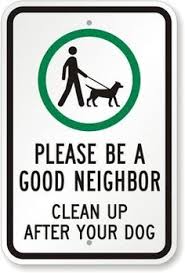 DOG OWNER REMINDER! CLEAN UP AFTER YOUR DOG(S)!

“Can we remind neighbors to pick up after their pets?! Alida Way pet owners are getting lazy and irresponsible. Just this week I found poop in our walkway, behind my car, and tonight I stepped in a big one and spent my Friday scraping it out of my shoe.”

Belinda Same in Winston Manor. I’ve seen poop in a neighbor’s front lawn as I was walking home. My kids have repeatedly seen or stepped on poop when they play in the park

Sharon Same here in Winston Manor Area. Especially at the parks that the kids play in and up by Serra Vista School.

Jen As a dog owner, I hate that these people make the rest of us look bad! I always carry extra bags when out walking so I can pick up other people’s dogs’ mess

Vicky Westborough. Neighbor let’s dog out to do it’s thing on our block. No clean up.nice. walks itself.

Judy I live in Winston Manor and have had poop on the sidewalk in front of the house and worse yet people shove the bags of poop in my bushes!!

Belinda I’ve seen those too!

Denise I walk Alida and surrounding areas and have found dog poop all along the sidewalk by the Rotary Plaza and up Ponderosa by the field and school. It’s pretty sad that you have to keep your eyes on the sidewalk so you don’t step in it instead of enjoying your walk!! There is one particular man (a resident of Rotary Plaza) who walks his dog along Alida/Ponderosa and lets his dog do his duty and never picks it up. I don’t have a dog anymore, but carry the bags to hand to those who don’t know that when you have a dog you must clean up it’s poop!!

Katie I love it when someone is walking their dog by my lawn and I walk outside and look at them. Once this guy used a recipt from his pocket to pick up the poop. I knew he was the one who’s dog always pooped on my lawn

Patricia Same on the streets along Greendale. I once had a big one by my garage door. I was wondering if someone just lets their dog do their business or it was purposely done

Louie If you have a dog, you have the responsibility to take care of him or her, including their poop. It’s not right to expect your neighbors to pick up your dog’s poop.

Carole I have two dogs. I always pick up after them!!! It makes me so angry to see other dog owners don’t always ….. It reflects badly on those of us who do! Please dog owners, take responsibility for your animals! Thanks!

Tony Pick that Shit up asshole!!

Nelson It happens here at the Promenade all the time and Alta Loma Park is a big Shit Pile! 1/2 the problem are the dog owners who let their dogs off leash and don’t pay attention to them, usually walking on their own talking on the phone assuming their pets won’t poop. These people should not be pet owners.

Sharon No one’s yard is your dog’s piss and shit stop! You and your dog have no right to crap in someone’s yard. Guessing if one were to follow you and deposit their crap outside your door, one would get upset too! City parks with playgrounds ARE NOT a dog park… Dogs around children should not be off leash.

Lynda Same in Buri Buri. My neighbor sends his unleashed rottie down the street to do his business at everyone’s house. Sad that some aren’t considerate and don’t think rules apply to them. Thankfully I also know many responsible dog owners!

Raquel And no one has said anything to him ? I’d call animal control and tell them dogs are on the loose, he’ll have to pay to get them out of the pound

Lynda I’m debating, but really like the dog-owner, not so much!

Raquel And one next to my drive way too, my baby almost fell in it, you know I can’t wait to see a dog walker who’s dog is off the leash because I will ask ! I’m so mad !!! And thanks for this post !

Kathie I’ve even gone so far as to knock on someone’s door asking for a bag if I need more (my dog can go a lot…smh) or steal a bag off a newspaper in a driveway. I’d feel like a piece of dung if I walked away from poop… shoot I’ve even gone home and driven back to a house to pick up if I ran outta bags again. How do people do that?

Sucks… Once someone let their damn dog poop in our yard. I had someone off Craigslist come over to buy a desk…freakin stepped in it and trailed it into our house through the living room. Oh my God that kinda thing should happen to people who DON’T pick up dog poop. Smh….

Maria If there is a dog park behind Orange park WHY?. they come to Orange park with dogs and don’t Clean themselves

← SSFPD talk to Martin School students about gang activity
Does it take a death to bring stop signs to neighborhoods? →