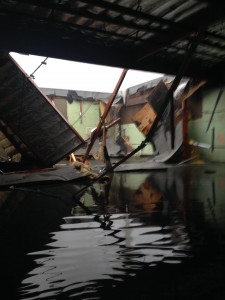 Bally’s Gym, located at 180 El Camino Real in South San Francisco, has been closed due to extensive storm damage which happened in  last weeks torrential rains. Billy Gross, Senior City Planner, confirmed the roof collapsed on the building and said inspectors had been on site to evaluate the damage. The note on Bally’s door directs members to their 3951 Alemany Gym in San Francisco. In addition 24 Hour Fitness on Gellert in Daly City will accept Bally members at their location.

24 Hour Fitness is in the process of a mutually agreed acquirement of certain Bally assets and expect to have the transaction  complete before Christmas. 24 Hour Fitness will take over 32 fitness clubs located in New York, New Jersey,  Denver and the San Francisco Bay Area. A call to San Francisco Bally’s confirmed South City Bally’s will be included in this acquisition. They had no additional information to share at this time.

Employment of Bally’s staff has been terminated. “All of the employees at the SSF Ballys lost their jobs, trainers included” wrote one of our neighbors in a message. “24 Hour Fitness was to hire the trainers yet today they decided not to”.

The Safeway shopping center in which Bally’s was located is slated for demolition next year. “We only know for certain that CVS and Safeway will be returning to the new Centennial Transit Village” Gross said. “The developer indicated a health club might be included in this new project yet specifics on who that might be have not been determined at this time.”

Speculation from members report Bally’s was to reopen in the Tanforan Shopping Center yet no confirmation can be made at this time as things are influx during the 24 Hour Fitness acquisition. Many neighbors are understandably upset.”My teenage daughter just signed a 6 month contract with a personal trainer and only had one session. The trainer originally told her that they are moving to Tanforan but Bally’s says they are not aware of any plans to reopen.”  Susan DeMorest said “I spent over 2 hours today trying to cancel her contract. I called the corporate office and was told there is nothing they can do. Our only options are go to the Alemany location or don’t go. We were told we must still pay the $900+ for the contract or be sent to collections if we don’t pay. I left a message for the Manager at corporate, it’s yet to be seen if they will even call back.”

Meanwhile South San Francisco’s Physique Magnifique is offering 50% off their membership to Bally clients who have lost their local workout facility due to this closure. “We take fitness serious and we work to help those in our community enjoy a healthier lifestyle” said owner Futaba Takashima “We understand the importance of having a full gym available to those in our City and surrounding areas and we welcome new members.”

Physique Magnifique is family owned by Futaba and her husband Jim Wilson. They have been at their 387 Grand Avenue location for nearly 20 years. Last year they were awarded the Best of South San Francisco Award which  honors the achievements and accomplishments of local businesses. For more information about Physique Magnifique  please contact them directly at 650/ 583-8648. 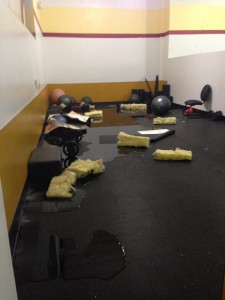 The storm did substantial damage to Bally’s Gym 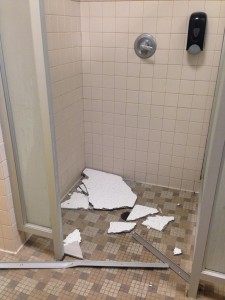 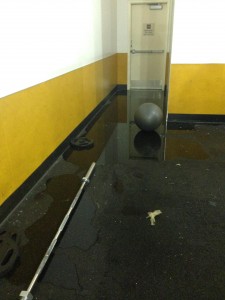 The storm did substantial damage to Bally’s Gym

4 comments for “SSF Bally’s closed due to collapsed roof, sold to 24 Hr Fitness”