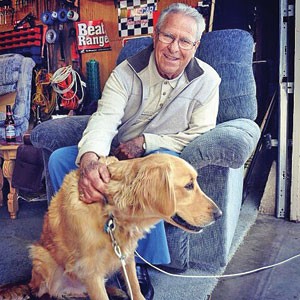 A 21 Gun Salute in honor of Frank Stahlnecker, a Veteran of WWII, will take place tomorrow afternoon in front of the MSB on Arroyo

A Celebration of Life will be held for World War II Veteran Frank Palmer Stahlnecker tomorrow Sunday January 11th in the Atrium at The Municipal Building (MSB) 33 Arroyo Drive . The celebration is scheduled for 1:30 p.m.-5 p.m. South San Francisco Police will be closing Arroyo Drive off during this event as a 21 Gun Salute is planned in honor of our local hero. Frank served two tours during WWII; one with the Marines and one with the Air Force.

Originally from Shamokin, PA, his family moved to California where he made a life in South San Francisco with his loving wife La Verne of 67 years and their children Mark, Brian and Karen. Frank was a retiree from Stecher-Traung-Schmidt Lithograph Co.
Frank Palmer Stahlnecker passed away peacefully surrounded by his family on November 13, 2014. He was born July 25, 1927. His spirit is carried on by his wife, La Verne, his children and his 8 grandchildren and 4 great grandsons
Till the end, Frank could be seen cheering for the 49ers, singing to Sinatra, sipping a Manhattan, smoking a cigar, recounting his stories and above all else, beloved by his family & friends.
“I’ve lived a life that’s full. I’ve traveled each and ev’ry highway. But more, much more than this. I did it my way” – Frank Sinatra My Way –

Donations in Frank’s name can be made to the Catholic Worker Hospitality House – 672 2nd Ave, San Bruno, CA 94066