On Sunday January 25th South City resident Scott Poggenburg alerted us to an accident he saw while traveling on El Camino Real in South San Francisco which had caused a traffic delay. “We just drove by Chestnut Blvd and El Camino Real and saw a bike rider on the ground. We were driving on the opposite side of El Camino Real in the middle of the traffic.” said Scott “But there were several people assisting and I did call 911. We sure hope he is going to be OK”

South San Francisco Police Sergeant Ken Chetcuti confirmed the incident “There was a malfunction on the bike causing the rider to fall so an injury report was made by our department.”

Neighbor Kelly Sheridan was passing by and captured a few photos; South San Francisco Fire Fighter Medics assisting the injured rider as they ready him for transport to the hospital as another cyclist looks on, and the mangled bike. 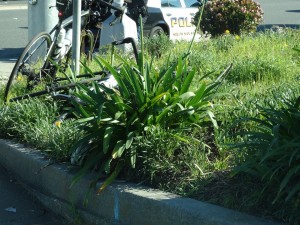 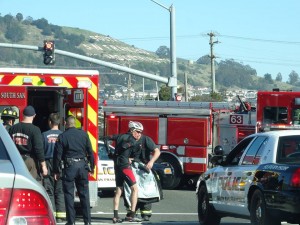