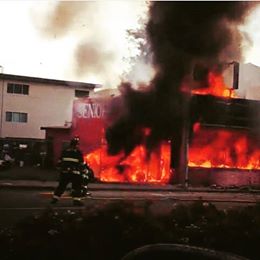 One of the favorite local pizza parlors went down in flames this morning. Seniore Pizza, located at 992 El Camino Real in San Bruno  next to Highway 380 EB Freeway on ramp, is gone. A car speeding into the parking lot hit the gas line causing it to rupture and sparking the fire. “Apparently Seniores workers were running late this morning, divine intervention, so no one was there” said neighbor Michelle Milam-Alexis.

Jacqui Pastoral-Conclara posedt on San Bruno Life facebook page “It was a high speed chase that started in downtown San Bruno. My neighbors and I first heard the sirens then the explosion from the Benz hitting the building and gas line.”

Inez Cunningham shared “I live South City up by sign hill and I can see the smoke from here.”

The owner is said to have adequate insurance and would look forward to rebuilding.

Reports state the driver had been pulled from the car by police without injury and was arrested. No injuries were reported. An insta-gram video can be seen by clicking HERE

Responses from patrons of Seniore Pizza echoed that of  David Valencia “I feel like i lost a childhood friend” although some like Lupe Ibarra  are more optimistic ‘Maybe they will get to rebuild it even better.”

Officials warn El Camino Real will be closed until 2pm today and advise drivers to use alternative routes.

UPDATE: Police have identified the driver as a 16 year old female who was running from police in her parent’s Mercedes Benz. No injuries have been reported. 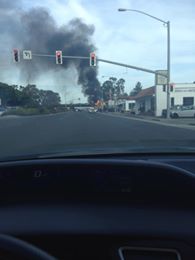 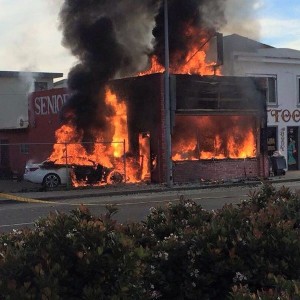 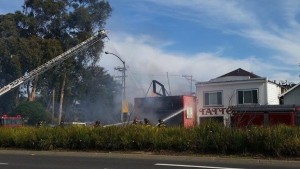 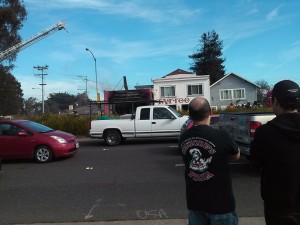 Angela Rudoni shares an update “Thankful no one was hurt. The place is still smoking and you can smell gas nearby” 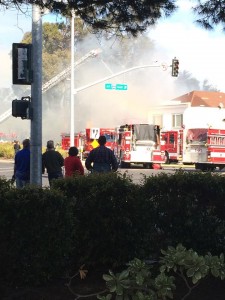 South San Francisco resident and member of the SSF Community Emergency Response Team, Randy Quok noted “It is has been a busy morning for SMC fire departments” as an 8 alarm fire is being battled in Pacifica near Rockaway and Fassler Drives. An earlier evacuation order for those in close proximity has been lifted, however firefighting continues. It is best to stay clear of Hwy 1 in Pacifica until further notice.