On January 14, the South San Francisco City Council voted unanimously to allocate $5.9 million of city infrastructure reserves, to provide a local match for $49 million of San Mateo County Measure A funding, to cover an overhaul of the bleak and underutilized South City Caltrain station.   With the funding project could be completed as soon as four years from now.

The station move is a centerpiece of the city’s Downtown Plan, intended revitalize the downtown and make better use of the station.  The project would add a tunnel connecting downtown to the station, and would add barriers gates preventing passengers from crossing when a train is coming. Currently without the gates, a Northbound and Southbound train can’t be in the station at the same time, since passengers could walk in front of a moving train.  The project would also improve the bus and shuttle dropoff area. 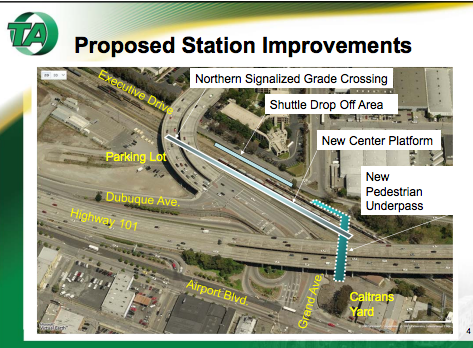 Currently to reach the station, passengers need to climb several sets of stairs and cross a major freeway entrance; passengers with wheelchairs or strollers need to traverse a long and steeply banked sidewalk beside a freeway onramp. 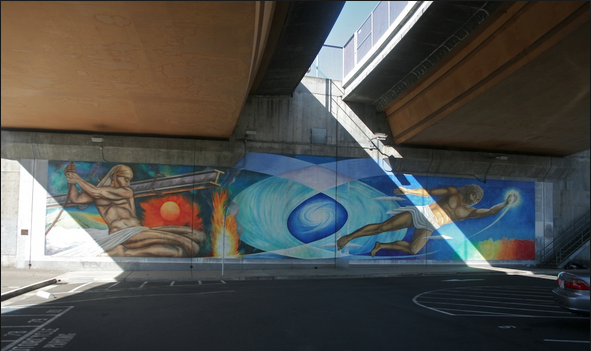 On January 8, the San Mateo County Transportation Authority reviewed about plans to allocate $49.1 million for the project; nearly the full amount of Caltrain funds currently available; the funding will be presented for approval at the TA’s February 5th meeting.

The project would use about half of the city’s capital improvement fund. Council Member Addiego asked for the finance committee to review how the funds would be replenished, and other uses of the fund, before he gives the final vote to spend the money.  The city is applying for grant funds that may cover some of the project.

I’m glad your council looks for alternate funding to make and improve South City. And happy to see that the Downtown Plan can and will be as nice as Burlingame or Millbrae and attract big names so that we the citizens and the thousands who work here have reason to shop here.