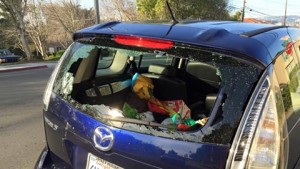 Two of our neighbors living on Mission Road have reported vehicles that had windows smashed in and objects stolen. The incident appears to have happened early yesterday morning.

“This morning as I was leaving home with my family we saw 2 cars with smashed windows parked outside my building complex. The first one was a work truck and the 2nd seemed to be a family car. The 2nd car was parked in front of my boyfriends car.We were so thankful that his car was not touched but it definitely alarmed me because there has been so many times that family friends or myself have parked on that street ” neighbor Clarissa Rivera‎ says, “My thoughts~ is this becoming a trend in SSF? I have lived in this same area for almost 10 years and this is the first time that I really felt well let’s just say.. Not safe. My thoughts go out to those that were affected by it and Just hope that it doesn’t continue.”

Christina Barnett Haas‎ was one of the neighbors who’s car was broken into. “Just an FYI to be watchful of your cars SSF peeps . Mine was broken into yesterday am and my battery jumper was stolen” Christina said, “South San Francisco is a great City, but unfortunately there are some bad folks around too” Christina’s car was parked across from the Court House, facing Grand Avenue.
While this is not an isolated case, the South San Francisco Police Department do not have this identified as a trend. However, they continue to alert neighbors to keep all valuables out of view, and locked in the trunk when possible. Should you see anyone loitering or attempting to break into cars please call 911. If you have any information to share on this or any other break-in, please contact SSFPD through the anonymous tip line 952-2244.