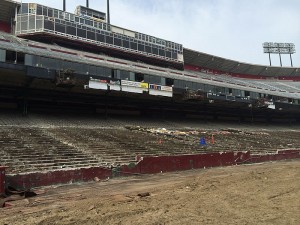 UPDATE: It appears the loud sound actually came from the SFO during a routine exercise.

On Tuesday February 4 around noon Nick Delorio heard a loud bump over near El Camino High School. He posted on our facebook wall asking if others might have heard it, was it an earthquake?

Soon others commented on hearing something similar from Terra Bay, Genentech, Gellert, Westborough and West Winston Manor. ESC checked with our Police and Fire departments and they had no answers. Firedispatch showed there were 2 fire alarms that went off in the East Grand business area and Fire Captain Todd Rael said they did hear something but were not sure what it was either. Lt Wall from our Police Department said they did receive the two calls yet they found nothing. “We thought it might be from the airport – sometimes the jet engines being tested at the maintenance facilities make loud booms” he told us.

Another possibility might be the demolition that started on the same day taking our beloved Candlestick down – Video from Mercury News of this event can be seen HERE . And more photos can be found HERE on Socketsite.com

So while we may never know for sure what the loud thump was, we take this opportunity to once again say Good-Bye Candlestick, it’s been a bittersweet love affair and you will be missed.

Below is our conversation from our facebook page as neighbors sussed out the situation;

Anita Walsh; heard it too..

Sharon Kay Gustilo Meyer I heard/felt it up by Terra Bay. I thought maybe a big truck was passing by on Hillside.

Nick Delorio May of been PG&E up on the mountain.. they did say they will be doing natural gas work or something and there may be loud bumps and noises.. I dunno my only guesa

Kathy Kerrisk We felt it over off of East Grand as well. Shook our entire building.

Jenny Victoria Murga Ceron Heard it up by Hillside also.

Blanca Perez Vargas Heard it too!!!! Was it an earthquake ??? Or the guys working at hillside blvd ????

Nick Delorio Strange that it was just one single big bump..

Joanne Evars its pge working on the pipe lines

Manda Wong Heard it over at Genentech. Big thwomp.

Erik Alvarez There’s a website for this. Give it a whirl.

Nick Delorio Yeah checked the website first figured it didn’t update yet or it was something else. In gonna still assume pg&e

Ashley Bowler I felt it too. It sounded like something heavy in my garage fell but when i loojed in there nothing fell.

YuSha Ng Heard it too!

Charlene Crigger “As part of PG&E’s ongoing efforts to enhance the safety of its gas transmission lines, we are performing a hydrostatic test of the L-132 line from Hillside Boulevard and Holly Ave (South San Francisco), over San Bruno Mountain to Schwerin Street and Geneva Ave (Daly City). This work requires we vent the gas out of a segment of Line 132 at Hillside and Holly in South San Francisco. PG&E is taking steps to mitigate noise and odor and have scheduled the work to create the least impact possible.

Jacqui Grant nothing here. Ukiah was the only one listed for today, so far.

Danny Herrera Why is everyone home? Go to work

Sheri Medina Heard it, too. It sounded like something big fell over with a huge thud.

RebeccaMarie Salaiz why would working on the pipeline make a house shake??

Victoria Neri-Chin I thought someone was breaking in the house. I was about to get loca!!!

Kimberly Rogers- Sutter Nick, It wasn’t an earthquake I checked the website and no earthquakes in Cali. Today except for s small one up by Ukiah

Vince Petersen Hydrostatic testing involves putting a vessel under pressure usually with water. So either the pipeline they tested failed or they broke pressure causing a loud rupture. Now the reason it was felt is because the pipeline is laid beneath ground and vibrations can travel miles underground unimpeded.

Jennifer Smith Pipelines are not that loud. Not unless you gas line explosion

Melanie Scola I heard it too on Hemlock. I ran to the front of the house…. thought maybe someone hit my truck….

William Evans Nah. Something blew up i heard it at lunch. It wasn’t an earthquake.

Paul Nemeth I heard it over by Buri Buri Elementary. .. thought it was an explosion.

Jennifer Smith I was at el camino high school

Jennifer Smith Nope. Hydrostatic testing is quiet. Not loud. It wouldn’t be loud unless there was something like a gas pipeline explosion

Everything South City Not yet but we are still checking into it. Strange to say the least – heard all over the city. {ksw}