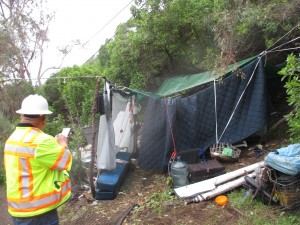 As volunteers set off one night last week for a homeless count across San Mateo County, some participants came across Mike, one of the residents at the Safe Harbor Shelter in South San Francisco who had been successful in real estate until the recession hit in 2009.

“I had my home here for 14 years and lost it all along with my business,” he said.

Mike, whose last name was not given, was one of the individuals encountered by volunteers in the early-morning hours of Jan. 22 as they searched the streets and shelters in census tracts across the county for a biannual homeless count. The effort was intended to provide a point-in-time snapshot of the sheltered and unsheltered homeless individuals living in county communities as part of a program of the U.S. Housing and Urban Development department.

Teams consisting of a paid homeless worker and a community volunteer were tasked with searching their assigned mapped area by foot and vehicle to track the number of homeless individuals, while tallying results by gender, age, families, and those living in encampments or vehicles. Data collected is analyzed and used to help with funding appropriate services to combat homelessness.

Mike told volunteers he is grateful for the resources provided at the Safe Harbor Shelter, which serves South San Francisco, San Bruno and Brisbane.

“Some medical conditions have made my circumstances even tougher, and the shelter has been a godsend as I wait for my disability claim to be processed,” he said.

This facility, which was established by the Samaritan House in 2000, houses 90 beds for adults over the age of 18 who are homeless in San Mateo County. Weekly health care is available by the county mobile clinic. Other onsite services include help with gaining employment and transitioning to a more stable housing situation.

South San Francisco Fire Department Safety Inspector Thomas Carney said that his office receives regular complaints about encampments, but when workers encounter homeless persons, they do not judge them.

“Any of us could be a few paychecks away from where they are,” he noted. “We work to help them find the services they need.”

He added: “Due to safety and health regulations, our department is required to dismantle the encampments. We work to let the homeless know in advance and we will help them remove items, and offer transportation to the shelter.”

“We come in contact with homeless citizens daily, either in response to a call or by patrol, especially our downtown bicycle patrol officer[s],” police Sgt. Ken Chetcuti said. “We refer them to St. Vincent De Paul or if there are alcohol or drug issues to San Mateo County agencies like First Chance, Palm Avenue Detox or San Mateo County Behavioral Health and Recovery Services if they are suffering from some sort of apparent mental health condition, whether it be diagnosed or undiagnosed.”

San Mateo County expects to publish the 2015 final report numbers in May.