South San Francisco neighbors are understandably upset over the lack of parking in their neighborhoods yet even more so are the pedestrians who must transverse the roadway because of cars parked on the sidewalk. Those most vulnerable are put into an even more precarious situation, the elderly, disabled and those with strollers and children, must take chances of walking onto the roadway and not being hit by cars coming or going.

This was the situation in the Southwood neighborhood when many years ago a neighbor in a wheelchair was confined due to cars parking up on the rounded curve sidewalk. After working with the City the decision was made to change West Orange Avenue to a one-way street with the intent of having room for traffic, parking and pedestrian passage. However this has caused additional traffic on side streets in the area and neighbors are not happy with that congestion and would like to see this one-way street returned to two-way as it was before. Concern has also been expressed that a stop light be put in at Southwood and El Camino Real so local neighbors can have safer access out of their area. 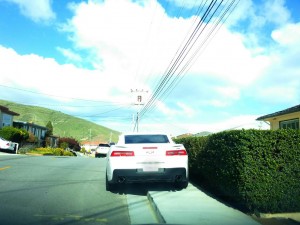 But what of the streets that have always been one-way yet continue to have parking up on the sidewalks like Spruce and Beech Avenues? A neighbor recently sent us some photos of problem areas. “I see lots of mothers pushing babies in strollers that consistently get forced into the street.” They said. “Spruce has blind corners and worst of all a blind hump just where the sidewalks are most blocked, making it all the more outrageous to allow.”

Beech Avenue also has this problem; it is a one-way street with cars parked up on the sidewalk. “It’s obviously only worse at night when more people are home with their cars, and all the more dangerous for pedestrians because of the dark.” It should be noted that blocking any portion of the sidewalk is a violation of California Vehicle Code 22500(f)

In the Brentwood neighborhood, Northwood Drive is a two-way street yet the 300 and 400 blocks have cars parked on the  sidewalk while neighbors on the 200 block seem to be fine parking in the street yet the roadway appears to be the same width on all the blocks there. It doesn’t appear to matter if the curbs are round or square, cars end up on the sidewalk nonetheless.

A and B Street really have narrow roadways yet those neighbors mostly manage to park in the street and expect those passing through to be respectful and share the road by pulling over to allow one car to pass through at a time. These are just a few of the streets neighbors have written us about.

With the recent California law requiring motorists to allow 3 feet of space for bicyclists it seems we all have to do more with less. How do we share the road equally, respect our neighbors and neighborhoods, and obey the law?

As South San Francisco continues to see more development in what is called ‘Transit Villages’, housing units near public transportation, many locals are concerned they are not being heard about the impact it will have on existing neighborhoods. Just because someone moves into a ‘transit village’ does not mean they will not have vehicles, frustrated neighbors explain. 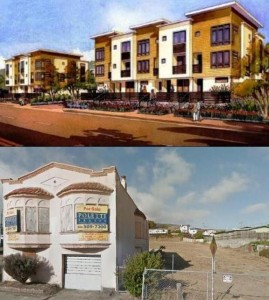 Replacing the farm on this 1.7 acre parcel, 35 units will compete for parking with existing single family residences in this established Sunshine Garden neighborhood.

The new BART Transit development in Sunshine Gardens will be creating a thorough fare between Baywood and Edgewood which have long been cul-de-sacs. Now not only will they see more traffic coming and going to the 35 units being built on the 1.7 acre site, they anticipate over flow parking to end up in front of their homes. Mayor Garbarino was quoted in the San Mateo Daily Journal ‘….parking might be a concern in Sunshine Gardens, but that is a common issue throughout all of South San Francisco. “Parking is a problem across the city, I don’t care which neighborhood,” he said. While it might be easier to say that when you have a two car garage/ two car driveway and own only two cars in a residential area with plenty of parking, not all of the residents are that fortunate.

Neighbors in many areas of town have complained they cannot park near their homes and must pack kids and bags a block or more away because many homes have 5 or more cars for a one car driveway. Too many neighbors use their whole front yard for parking, as well as the sidewalk and street. “I purposely bought my home in a single family residential neighborhood” Connie M said “It frustrates me that so many neighbors are renting out rooms to different people which brings in more cars. My neighborhood use to be family orientated but now people come and go, they are more transient, they are not considerate of others that live here.”

Elm is a one-way street yet cars park on the sidewalk in the hopes they are not hit, while leaving pedestrians unsafe

Those who live in the Downtown area must pay the City for monthly parking permits to park in front of their metered homes or compete with visitors for spaces in the lots. Pedestrians have a right to feel safe when walking on the sidewalks and residents have a right to park their cars in an area that is safe, and hopefully near their residence. And bicyclists now have their right to 3 feet of space.

Giving tickets to all the offenders who park on the sidewalk or across their front yards would be too time consuming and would result in a backlash on the city and would not solve this issue.There may not be an easy fix for all of it yet as the City continues to develop this concern needs to be taken seriously as tempers flare.

As another one of our neighbors said ‘Anger and revenge fuel the fire. This is a problem with the City that needs to be addressed.”