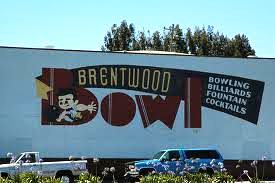 The iconic Brentwood Bowl in South San Francisco will remain in its historic location at 237 El Camino Real and will not be moving to the old Century Theatre on Noor Avenue.

However the current condition of the Bowl is tired and needs renovations and upgrades while maintaining the tradition of a friendly and comfortable destination. The current owners have contracted with former owner Millard Tong, and through Tong, Wayne Despues.

Despues, who was graduated from South San Francisco High School in 1977, agrees. “I have a vision, and the background, to make it happen yet we need the communities support.” Despues said. “I have already invested a lot into seeing the Bowl come alive once again at the Noor location. We might not be moving to a new location but we can still move forward with some great changes to breathe new life into our old tradition at the Bowl.”

Despues’ plan is to turn the pro-shop into a food counter and add upgrades to the restaurant for a more inviting entertainment arena for live music. Renovations to the lanes and bathroom would fall to Millard Tong.  “Getting back into both the entertainment and food service is a dream, a passion of mine” Despues said.

Having graduated from San Francisco Culinary Academy in 1988, Despues’ has honed his craft while working for hotels, private events, and internet cooking shows as well as opening two restaurants in Colorado. His musical background, which began in 1974 playing with the SSFHS Blue Knights, includes performing at Orphan Annies, Peabody’s, Jolly Fryers and the hotel circuit.

A newly renovated entertainment venue would be welcomed and to retain some of the historical flavor perhaps could be done best by one of our own South Citians. To that end Despues’ has set up a GO FUND ME ACCOUNT to help raise the monies needed to complete this goal. “I had a large financial stake in the Noor property which I lost. I still have a great vision and I will need the community to rally around to make this happen.” Funding should be in place within a month at which time Despues looks forward to hiring local workers to complete the work. For more information contact Wayne at brainstormgoodideas@gmail.com

Other local historical places that have made a successful transition while retaining the essence of its roots includes South San Francisco’s former Dot & Andy’s revamped to The Standby and Brisbane’s 7 Mile House.

Brentwood bowl opened in 1951. At the time, this 16 lane house was the largest bowling center in San Mateo County (hard to imagine today). In the early days, all bowling centers had wood lanes. Brentwood Bowl now has synthetic lanes, over the years Brentwood Bowl has set records that no other center could match. In 1961 the Brentwood Bowl team, which included the owner, Bob Wild, won the Men’s National Tournament.
In 1965, the Junior National Champion was none other than our Junior Bowler, Dave Doran. In 1988, Brentwood bowlers Elaine Van Otten, Sharon Cassidy, Jan Gaynor, Bonnie Magness and Diane Dickson brought home the Women’s National Championship.  In 2006, Elaine Van Otten and Sharon Cassidy became the USBC Women’s national doubles championship winners… Paula Harris qualified at Brentwood Bowl for the first ever national bowling karaoke contest. Paula then advanced to the regional finals and onto the finals in Florida, where she was named the national winner. An impressive championship history for a 16 lane center.

The Wild Family had a tradition of making Brentwood Bowl a place where everyone felt at home. Whether bowling, playing pool, having a meal or sharing a cocktail with friends, you felt like family.

We need to fund this when you lost money in the Noor property which started at least 3 yrs ago, and now we have to contribute. I don’t think so! We were promised all these fancy things that were going to happen in the new place which never got off the ground! I won’t fund it I think the owner should remodel it and pay for it as he is going to get it back in return!

I lived on Northwood Drive from 195-1983. That place was walking distance for me. I had bowling for gym class first period from 1976-1977. This place was also always a Friday and Saturday night starting point. Had a lot of fun there. Glad it’s staying where it should be.

I believe the owner should remodel the bowling alley! Why should all of us put in the go fund me and you will get the benefit of it at the end! The Noor property was promised about 3 yrs ago and never got off the ground and now that you lost your money in it we have to pay. I’m not paying anything!