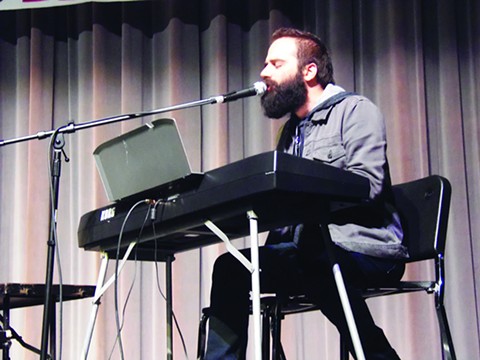 Every Armenian child grows up learning their people endured genocide, said Simonian, who is an Armenian-American and a member of the indie pop duo Capital Cities.

The mass killing of roughly 1.5 million Armenians in Turkey (then the Ottoman Empire) began in April 1915, and is memorialized by Armenians worldwide on April 24. The government of Turkey, however, has not officially recognize the killings as acts of genocide.

Simonian noted that the U.S. government also does not officially recognize the Armenian genocide, but he praised the students and staff of the San Mateo County school for doing so much to shed light on the issue.“It’s good that schools like this are taking steps to educate people,” Simonian said. “We need to make up for the fact that the Armenian genocide is not in textbooks as much as it should be.”

Simonian said he agreed to perform the mini-concert when the event’s organizer, teacher Sevana Panosian, reached out to him. Panosian, who is also Armenian-American, spearheaded an effort to incorporate lessons about the genocide into the school’s curricula. A training program on racism had already been in place at El Camino. It was implemented throughout the South San Francisco Unified School District in response to an alleged incident of racial bullying at the school.

Panosian said that because the Facing History and Ourselves curriculum already included lessons about the history and causes of genocide, it was easy to incorporate information about the acts of ethnic cleansing perpetrated in Turkey. These lessons included a “deep study” of witness poetry and readings of “The Sandcastle Girls,” a historical fiction novel by Chris Bohjalian that portrays a love story between an American nurse and an Armenian refugee from the genocide, Panosian said.

Poetry played a role in the Tuesday event, with student spoken-word artists Jose Ravelo and Desiree Orque collaborating on a performance that drew connections between genocide abroad and the everyday violence that some teens witness in their own neighborhoods. The event also featured a performance by the school’s choir and a speech by student Marc Vasquez, who challenged his schoolmates to ask themselves what they can do to prevent future genocides. “We do this through activism,” Vasquez said, “through arming ourselves with activism and critical-thinking skills.”

Not all of the audience members were students. Malcolm Catchatoorian is a retired Armenian-American who said his family’s history was shaped by the genocide when his great-grandmother fled with her family to Iran to escape the violence. And then when famine hit Iran years later, Catchatoorian said his grandmother loaded her five sons into a caravan to Calcutta, India, which they viewed as a land of opportunity. “We have to keep these stories alive, because this is what goes into the archives,” Catchatoorian said.

The centennial anniversary of the Armenian genocide will be commemorated at 7:15 p.m. Friday at City Hall in San Francisco. Another related event is “Witness and Rebirth: An Armenian Journey,” a concert at 5 p.m. Sunday at the Palace of Fine Arts. Visit www.rememberanddemand.org for more information.