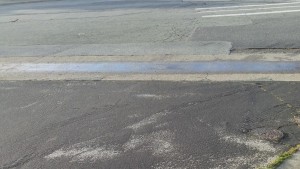 Calwater identified the rain water run off from a hill behind homes in Winston Manor Photo: Belinda Skarsgård

On Tuesday April 7th South City resident Belinda Skarsgård posted on our Facebook page “Winston Manor neighbors who live on Arlington: What’s up with the flowing water from Arlington going to ECR? Reported that months ago to Calwater and it stopped but this afternoon saw the same thing”

We contacted California Water Service Company Inc via their Facebook page and we were impressed that within 2 hours of our post Calwater had a service technician out to the location to check on the problem. They then immediately reported back to Everything South City;

“Our field representative found the water and tested it. There was no chlorine in the water (chlorine would indicate that it’s potable water coming from somewhere). He also checked the meters at the properties where most of the runoff is appearing, and neither dial is moving (which would also indicate a leak). The lack of chlorine does indicate, however, that it is storm water runoff. There’s a hill behind these homes where we suspect the storm water is coming from, going through the backyards and into the street.”

Having witnessed a similar situation a while back Belinda wrote ‘On my previous report a few months ago it had been a few days that there was 0 rain but water was still flowing. Would you know what they found out during that time?‘

It was runoff then too. We found where it mainly collects and have seen it take several days for the runoff to make its way all the way down the hill. It’s just slow-moving.

Recently one of our neighbors, Glenda Dywer, replied to a 2014 article we had published California’s Super Drought: Where does most of our water go?   with a very important comment “The largest percentage of water waste is flowing freely out to the oceans and not being captured.” Many of us agreed as we watched the water from this recent rainfall run into our drains and feeling powerless to harness it for later use. San Mateo County does have a rain barrel rebate program and more information can be found HERE.

Too often we find only complaints and dissatisfaction with our utility companies which many are happy to voice. To that end Everything South City believes a SHOUT OUT is due to California Water Service for the great customer service they provide to our community. More information on CWS can be found HERE.