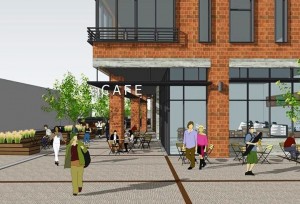 Preliminary concept of the Grand/Cypress Project

The Brookwood Group is planning to build two market-rate housing projects in Downtown South San Francisco; one at Grand & Cypress (46 units) and the other on Linden Avenue (38 units). Brookwood will hold two community meetings, on April 20th & 21st (at 6:30pm at the Miller Ave. Parking Garage). The projects will be considered by the Planning Commission in May and City Council in June.

This week (April 13-17), Brookwood’s environmental consultant will be doing some field investigation work, including drilling for soil samples on both sites. This picture shows a preliminary concept of what the Grand/Cypress project might look like.