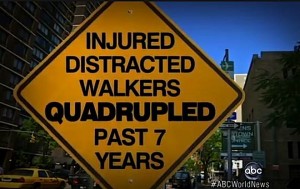 “Just a reminder- Pedestrians have the right of way in the crosswalk. Nobody cares how late or impatient you are. You are suppose to wait until they are crossing to make a traffic move. I say this because someone almost hit my daughter in the crosswalk at EHS!”

We are attaching the results of last week’s STEP program that ‪#‎SSFPD‬ & Daly City Police Department headed up in our communities for the purpose of bringing more awareness to driver safety, not being distracted and really watching out for pedestrians.

And while there were many protesting here on ESC about the saturation of police on the streets and decoys, etc. that day, the bigger picture is keeping our kids/families/friends out of the ground in Colma or out of the hospital with life changing medical problems.

It is amazing to see how many people are still texting and driving – whatever makes you think you, and what you have to say, is that important to even put anyone else at risk? ‪#‎StashThePhone‬ – pay attention – we’ve had 3 kids hit in our city in the past month with other near misses. Wake up South City – Distracted Drivers Awareness program continues through April and hopefully we will take it to heart and let it continue as long as we drive.

Drive Safe and Peace Out!

Below are comments from our neighbors: