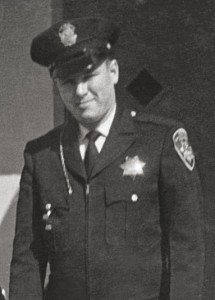 South San Francisco Police Officer Arthur “Bill” Moyle, who was killed in the line of duty in 1953, will finally be added to the California Peace Officers Memorial (CPOM) in Sacramento on Monday, May 4th, the 62nd anniversary of his death. Officer Moyle was struck and killed by a drunk driver on US-101 just three weeks after joining the police force. Although he has been honored at the National Law Enforcement Officers Memorial in Washington D.C. and at the San Mateo County Peace Officers Memorial, he was never included in the CPOM due to an unintentional oversight.

A candlelight vigil will be held at 8:30 PM on  Sunday, May 3rd, followed by a formal enrollment ceremony at 10:30 AM on the 4th, in which Officer Moyle’s name will be permanently added to the California Memorial. In addition to Moyle, 17 other officers will be remembered and honored.

“As Peace Officers and Law Enforcement employees, it is our duty to never forget those Peace Officers that have given their lives in the line of duty while serving to protect our lives,” said Lieutenant Keith Wall. “It’s hard to believe it was more than 60 years ago, but no matter how much time has passed, Officer Moyle was one of our own and should be given the highest honors possible.”

At 2:30 AM on May 4th, 1953, Moyle was placing road flares and directing traffic away from an accident that was blocking a lane on the US-101 when fellow officer Sergeant Silvio Stagnaro noticed a vehicle approaching at 80 mph. The 23-year old driver of the vehicle was intoxicated and did not see the blocked lane in time to avoid Moyle.

Officer Moyle was also a U.S. military veteran who served in the Navy aboard the USS Cleveland in the South Pacific during World War II. He was 27 years old when he died. Officer Moyle was the first and only police officer to be killed in the line of duty in South San Francisco.

Officer Moyle’s four surviving sisters, all in their late 70s and early 80s, will be at the ceremony in Sacramento and said they were humbled and honored to hear that their brother and his service had not been forgotten.

“It’s important for us to make Officer Moyle a permanent part of our SSFPD memory for our existing and future officers and employees,” said Wall.