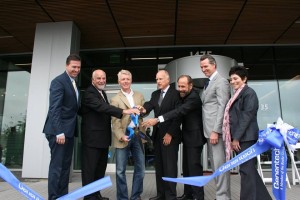 The new 255,000-square-foot 7 story LEED certified office tower was designed by the architectural firm Perkins + Will with assistance from Lawrence Berkeley National Laboratory’s FlexLab, and is considered one of the greenest in the area and will save 35% energy. The construction work was done by local unions members and is one of two major buildings completed by Genentech in the past six years .

Genentech is investing more than $200 Million in new construction on the SSF campus and currently employees approximately 10,000 in South City alone as it continues to grow. Further Genentech has plans to spend $2 Billion in capital investments in California during the next year including their Vacaville and Oceanside locations.

2 comments for “Genentech Continues to Grow in South San Francisco”