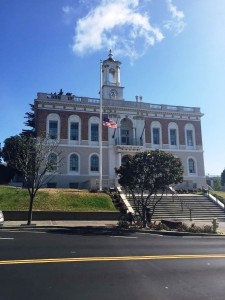 SSF Flags are flown at Half Staff

In honor of Sergeant Scott Lunger of the Hayward Police Department, and the five soldiers killed in the terrorist attack at military facilities last week in Chattanooga, Tenn., flags at City Hall and public buildings are at half-staff.

Sgt. Lunger was fatally shot during a traffic stop early morning on Wednesday in Hayward. Lunger was a 15-year veteran of the Hayward police force.

Last week, four marines and a navy sailor were killed in two attacks – one attack at the Navy Operational Support Center in Chattanooga and another at a recruiting center.

“Our hearts go out to all of the families and communities involved in these senseless tragedies,” says Mayor Richard Garbarino. “It’s time for us to gather as a community and show our respect to all those that serve our country and citizens on a daily basis.”

The flags will be flown at half-staff until sunset Saturday.