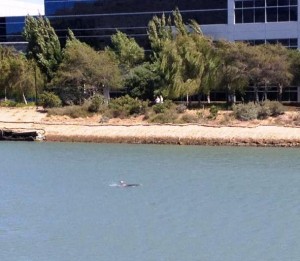 Another dolphin was spotted in San Francisco Bay off of the Bay Trail near The Cove, the new development being built on the old American Bridge site. Bottle neck dolphins are frequent visitors to the Bay and we’ve had them visit our inlets including the Colma Creek which opens to the Bay. CLICK HERE for past articles on local dolphins.

This dolphin was sighted by South San Francisco resident Brian Perry who said “The dolphin has been in the Cove since yesterday, Thursday July 30th”. After we shared this photo on our FB page other neighbors commented they too had watched the dolphin. Sal Lopez wrote “Yeah it was cool seeing it . My daughters were excited. We were walking and I thought I saw Nessy the Lockness monster lol. I thought I was tripping. Then a few minutes later it came up and sure enough it was a dolphin. I was like no way.” 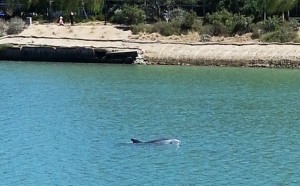 “I thought it was Loch Ness” Sal Lopez jokes

The Bay Trail is a great place to explore, you never know what you just might see.

If you have not yet checked out the Bay Trail in South San Francisco, plan on doing so soon. Trails.com has this to say:

From the trail around Sierra Point in Brisbane through South San Francisco to the San Francisco International Airport, there are altogether more than 5.5 miles of Bayside paths. They take you on a number of short trips beside yacht harbors, through Point San Bruno Park, along Colma Creek and around Belle Air Island. Because of the present gaps between completed trails, these trails are more interesting for walkers than bicyclists. However, as new building construction fronting the Bay gains approval, trails will be required and gaps will be filled. This trail guide includes the following trails: A Stroll Around Oyster Point and Its Yacht Harbors, Point San Bruno Paths, Some Short Walks on the Trails beside Colma Creek, A Parcourse and Hike on Belle Air Island.

For more information and maps of the Bay Trail CLICK HERE