The South San Francisco Unified School District Board of Trustees has entered into an agreement with Opterra Energy Services to provide permanent lights at the recently-modernized El Camino High School football field, among other energy-related amenities on District campuses. During the upcoming prep football season, Opterra will utilize portable lights at the El Camino field at no cost to the District, according to the agreement. Night home games will be played on Sept. 25 and Oct. 9, 16 and 23. Home dates vs. Washington of San Francisco on Sept. 5 and vs. rival South San Francisco on Nov. 14 will remain as afternoon games. Opterra officials, speaking during the Trustees’ Aug. 13 meeting, said, pending community and other input, it is anticipated that permanent lights would be installed at El Camino in time for the 2016 football season. The lighting upgrade at El Camino will place the Colts on an equal footing with its neighbor, South San Francisco, which has had a lighted football field for decades. 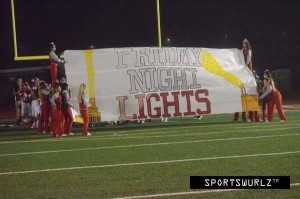 From Coach Jake aka Jake Jacobson

SSFUSD BOARD VOTES 5-0 to Light Up COLT FIELD. It’s official El Camino will have FRIDAY NIGHT LIGHTS this Fall. This season the OpTerra Energy Services Co. will pay for temporary lights for 4 night Football games and 1 Soccer Game. Ground Breaking for our Permanent Lights will take place April 2016.–If you can dream it then it can be done, but only if you get off your butt and give it a push or two.–COLT PRIDE

Below are our Home Night Games at Beautiful Colt Field.

Just wished the Board lived at the back entrance to the field.