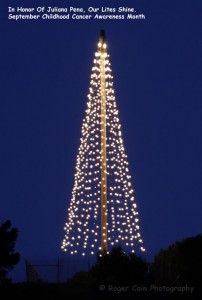 Tree on Sign Hill to be Lit the Month of September

Officials and Councilmembers from South San Francisco, along with the Peña and Watson family, will gather on Monday, August 31st to kick off “Childhood Cancer Awareness Month” by lighting the popular Sign Hill Tree. The tree, made popular by its holiday lights during the winter months, is being lit in September on behalf of Juliana Peña, a brave two and a half year old South San Francisco resident who lost her courageous battle with Neuroblastoma in 2012.
The tree holds special memories for the family as the toddler lovingly referred to it as the “Light Tree,” and often gazed at its glow as she fell asleep in her home at the base of Sign Hill.
Peña and Watson founded Juliana’s Journey Foundation, a 501(c)3 Non-Profit Organization to fight back against childhood cancer. They have been presented with multiple Proclamations by California State and Bay Area officials declaring September as Childhood Cancer Awareness Month, including the passing of SCR 133 by California Senator Jerry Hill to officially recognize the month. The couple was also presented with a Proclamation honoring their efforts from Senator Hill and Assemblymember Kevin Mullin pledging the state’s support for their foundation.
“Organizations like Juliana’s Journey Foundation bring critical issues like childhood cancer to light. In tragedy, it’s important that our community bands together,” says Mayor Richard Garbarino.

Juliana’s parents have asked their 4,000+ followers from Social Media to “Go Gold;” the color of the awareness ribbon, and a movement that has quickly trended across the nation and is the intent of all of the people involved to ensure it remains that way after September passes and in the years to come.

Juliana’s Nana thanks Juliana’s Journey Foundation, Senator Jerry Hill, Assemblymember Kevin Muliin, The City of South San Francisco, Everything South City, all of “Cita’s Soldiers” and of course “The Golden State” of California!