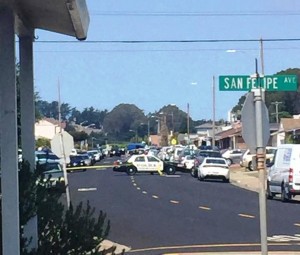 Neighbors report Del Monte is closed from Lacrosse down to Romney.

This morning Everything South City received dozens of inquiries along with unconfirmed information regarding police activity and a shooting having taken place around 10:30 am in the Buri Buri neighborhood.  We have contacted South San Francisco Police requesting confirmation and updates as they become available, Unoat which time we will post here.

Below is from our FB page:

We have unconfirmed reports of a shooting and #SSFPD have Delmonte Closed from Lacrosse down to Romney. Dan Parks posts: ” I had my scanner on this am due to the sirens. Cops responded to Del Monte area of a person with a rifle. Cop showed up, had the suspect at gun point, told him to drop the weapon and suspect didn’t. Suspect was shot in the stomach and was transported to the hospital.” Park’s report is similar to what neighbors in the area have also heard.
We will update when more info is received. Please remember this is unconfirmed info until we receive PD report. Please keep all involved in your thoughts.
Any disrespectful comments will not be allowed for public view.

In addition we have unconfirmed reports of a gun fire on/near 4th Lane around midnight this AM:

Reports of shots fired. Grand and Maple area … Car seen fleeing away from 4th lane> Silver Infinity.. Multiple casings found on 4th lane . AVOID AREA if you can … More to come. {AM}

County Wide Be on the looking out for officer safety .. Shots fired at a house 2008 Silver or White G35 Infinity last scene driving down 500 block 4th lane unknown direction . 554 4th lane has broken windows and 40 caliber casings in front. . No Suspects or Victims {AM}