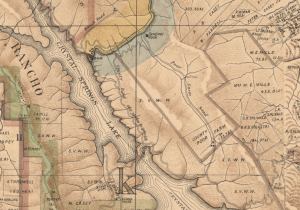 Unbeknownst to most travelers of highway 92 in San Mateo County, as they pass under the Ralston-Polhemus underpass they are actually voyaging through an area with great historical significance. In the Southeast corner of this intersection remains a timeworn graveyard that was once the final resting place for some of institutionalized residents a place called the “San Mateo Poor Farm”.

In the late 1870’s in San Mateo County if you were sick and unable to care for yourself, or if you found yourself labeled a vagrant, there was a high probability you may end up a ward of the county at the San Mateo Poor Farm. This place has a special importance in the unique drama of the San Francisco Peninsula, where the old west met the sea. In our heritage of how we treat our old poor and indigent, and the story of how our public county hospital system came into being. It was San Mateo County’s first hospital and was very important in protecting public health during the epidemics of tuberculosis, bubonic plague after the 1906 earthquake and influenza in 1918. 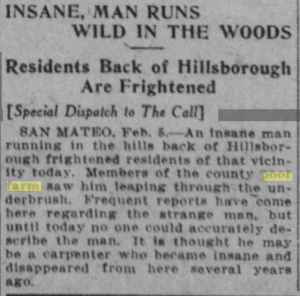 Founded in July of 1876 the San Mateo Poor Farm was an institution that was partly hospital and partly prison. Inmates were housed in one building, and tended to gardening and livestock. They were required to provide food and care for the sick and impoverished who were housed in a separate adjacent building. People unable to care for themselves for medical reasons were held in the hospital. The inmates helped to tend to their care and grow food used in the institution with the excess produce to be sold off.

The 140 acre property straddles the western line between San Mateo and Belmont, and by most accounts life was rather grim for residents of the Poor Farm. However there are a few colorful stories and characters that can be found sifting through old newspaper articles regarding this place:

In 1909 the Poor Farm’s Superintendent, Al Eikerenkotter, was accused of embezzling supplies. An investigation was held and he was exonerated by the Board of Supervisors, an act the SF Call described as “white washing”. In 1911 an “Insane Wild Man” was spotted running around the wilderness between the Poor Farm, a report that very much frightened the wealthy residents of southern Hillsborough. Frank Silva, who owned a farm near the Poor Farm had his fingers amputated after an accident with a horse drawn mowing machine in 1907. Black Chapete, a handlebar-mustachioed immigrant from Portugal whose real name was F. Rodriguez Crovello, was likely the Poor Farm’s most well-known ward. Before Black Chapete ended up in the Poor Farm, he had owned the roadhouse now known as the Alpine Inn. In 1891, it was a ruckus wild drinking and gambling hall and was disapproved of greatly by the Victorian-minded peoples of Stanford and Palo Alto. Not all Poor Farm wards were destitute; in 1910 a patient named John Ryan left fifteen hundred dollars in his estate to his relatives. This same could not be said of Mr. Edward Gallagher: in 1904, at the age of thirty seven, he was found after hanging himself from a tree.

In 1894 the Poor Farm fulfilled its need for a Cemetery, placing it in the southeastern-most corner of the property. Graves were marked with wooden head markers and were numbered. San Mateo Poor Farm records show 542 graves logged. However in 2001 the University of Santa Clara Archaeology and Anthropology departments teamed up with The Institute for Canine Forensics and they found grave markers numbered into the 600’s. Today and everyday people will drive pass with this graveyard totally unrecognized but some old wooden markers remain, and a line of eucalyptus trees indicates a possible tree laden border of this solemn place.

In July of 1907 the San Mateo County Board of Supervisors had come to the decision that the capital involved with running the Poor Farm was too great, alternate plans were designed and it was decided the property was to be sold off. The only bid came in February 1913 from Spring Valley Water Company’s own President, William Bowers Bourn II. He offered twenty thousand dollars for the entire 140 acres and had designs to build a villa with a construction estimate of half a million dollars. In April of that year the Board of Supervisors elected to reject his bid, and by 1915 Mr. Bourn had started construction the Filoli Estate. 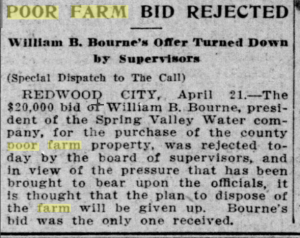 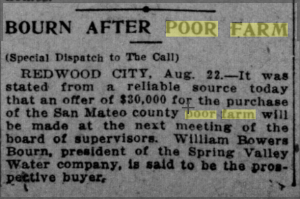 The Spring Valley Water Company paid $30K for the Poor Farm Property. Today this public land under the stewardship of the SFPUC

As the century rolled on the national attitude of the times had changed and Poor Farms had become unfashionable, their practices considered antiquated. In 1923 a County Hospital was built at Beresford and around that time the Crystal Springs Rehabilitation Center replaced the Poor Farm completely.

Poor Farms, also known as Poorhouses or Almshouses were not by any means unique to San Mateo County. Laguna Honda, where a hospital still stands today, was the equivalent for San Francisco County. Inmates who required surgery were shipped north to this institution for their procedures. They existed throughout the United States and existed in some form or another in England as far back as the tenth century. 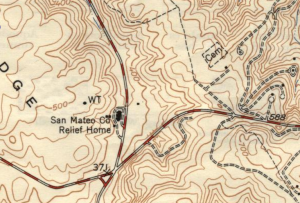 The connection between the San Mateo Poor Farm and the property we now call the SF Peninsula Watershed runs deeper than its geographical proximity to then Spring Valley Water Valley Property. It has in common with the watershed a deep and colorful history that is for some reason is not taught in our public schools, and generally unknown by the public. In 1923 the population of San Mateo County was roughly 40,000 and the city of San Mateo had around 6,000 people. If not the same time, we share the same space as these people from the past, and are connected to them nonetheless. This is our heritage, something to think about whist traveling on the roads that surround the hidden historical place called the SF Watershed and beyond.