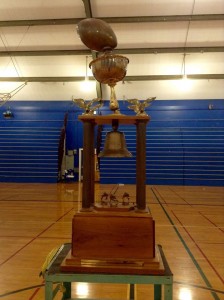 Who will bring home the BELL this year?

It’s time for Rivalry Week for the two comprehensive high schools in the South San Francisco Unified School District. The annual Bell Game, a traditional football contest  between neighboring El Camino and South San Francisco highs, is scheduled for 2 p.m. Saturday, Nov. 14, on the ECHS COLT field. The two South City schools have been playing this game since 1962.

This month’s event will be the 54th in the series which South San Francisco leads with 43 wins; El Camino has won nine and there has been one tie. El Camino’s last victory over its intra-city rival came in 2003. A junior varsity game will precede the varsity contest, beginning at 11 a.m. Both schools
are members of the Peninsula Athletic League.

El Camino High School is located at 1320 Mission Road on the border with Colma. Ample parking is available on the campus.

i have tips my caps off to el camino they played there buts hard in that game. i know this one hurts for el camino but the team never gave up at all.there quotes good vince lombardi quotes it goes like this ”the achievment of an organization are the result of combined effort of each individual”

now i’m looking to see how el camino basketball boys team this year i hope they can bounce this year and win the pal north division this year and still hold on the hoop trophy this year.

Just sit back and watch the game! LOL
#Warrior
#GoBigBlue

one more thing for el camino is that they had to tackle well and play good defense and offense there be a upset alert. bill Murray said that there kindliness for south city be over on saturday end sc streak

Not So Fast South City Fans The Key in This game That El Camino is Ready to Make Some Serious Noise and raise that Volume 12. It’s El Camino Turn to win That Bell This year I’m Going With The Upset My final will El Camino 47 South City 7. The Problem is For South City is That They Been Giving up A lot points to Serra in Week #3