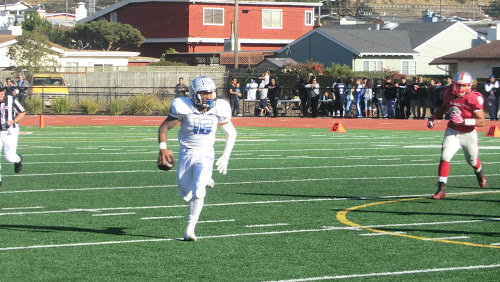 South City quarterback Kolson Pua rolls out on a six-yard run in the second quarter of the Bell Game, on Saturday, Nov. 14, 2015.
Photo by John Baker.

It’s now an even dozen in a row for South San Francisco High, which won its 12th straight Bell Game on Saturday against rival El Camino, 53-22, in the 55th edition of the rivalry.

One of the reasons South City now has a dozen straight Bells was the play of senior running back Eric Kamelamela, who tallied 223 yards on 33 carries, and scored four touchdowns.

“It’s the best feeling in the world,” Kamelamela said. “(The Bell) is staying at South City — for many years to come, also.”

Kamelamela’s efforts were a key part of a Warriors attack that compiled an impressive 483 total yards of offense (330 on the ground and 153 passing), compared to a net total of just 68 total yards for El Camino.

“We gave it a good shot, but they were too much for us,” said El Camino coach Eric Jacobson. “The one thing I can say about the kids on this team is that they’re very good kids. I really had a good time with all of them.”

After the Colts stopped South City on their first two drives, the Warriors finally broke through on their third try. Tavaimanu’uliletiuoali’I Tuitasi capped a long South San Francisco drive with a one-yard barrel across the goal line to put the Warriors up by six with 45 seconds left in the first quarter.

El Camino got on the board on a defensive play 2:05 before halftime when CJ Bautista picked up a loose ball on a South City lateral attempt and ran it back nearly 80 yards for the Colts’ first touchdown.

“It was like 3-and-18, so we had to do something,” said South City coach Jay Oca on the lateral attempt. “They had picked us off on one of our deep balls and that play is usually money for us.”

It was the fourth week in a row SSF had given up a touchdown on an offensive fumble or turnover.

The teams exchanged touchdowns in the final 1:13 before the break, with David Miller scoring for South City on a 60-yard pass from Pua just two scrimmage plays after EC’s score, and the Colts’ Armin Webb throwing up a halfback option that receiver Efrain Ramon pulled down for a 21-yard score right before the break.

In the second half, Kamelamela stepped up, gaining the majority of his yards and scoring all four of his touchdowns (on runs of 3, 37, 20, and 46, respectively). Oca said Kamelamela “got stronger as he went on,” but Kamelamela said he just played smarter.

In the third quarter, El Camino briefly got within a touchdown on Jordan Ebalo’s 9-yard TD pass reception and a 2-point conversion (also from Ebalo), but Kamelamela helped extend South City’s lead from there.

Besides Kamelamela’s scores, the Warriors also got a 23-yard field goal from Angel Nevarez in the second half.

“In the first half, a lot of penalties brought us back; We had to do a lot of things to try to get first downs,” Oca said. “Once we settled down, we were able to run our offense and pound the ball, which was our game plan.”

Lua completed five of 13 passes for 124 yards for South City, which also got 55 yards on 11 carries from running back Peter Lopez and an interception from David Alapati.

El Camino tallied only seven yards rushing, but made some progress through the air. Junior quarterback Heinay Keller completed six of 11 passes for 40 yards, and Webb both made his single pass attempt, but also picked off a South City pass.

Jacobson takes some solace in the fact that the junior varsity won their game 41-7.

“One thing we have going for us is that we’re very junior oriented and our JV team is very talented,” Jacobson said. “They won a big one today, so the future looks bright.”

It will look even brighter next fall, with permanent lights installed at Colts Field. Ground-breaking for the lights’ installation is scheduled for April.