Because the 57-acre landﬁll site sits on waste disposed of during an era of lax containment regulations, Brennan claims potential environmental and safety hazards could make it an inappropriate location for the commercial development city ofﬁcials envision.

“Where is the wisdom in developing such a risky site?” Brennan asks.

The harbor district’s own com- missioners previously vetted and approved an agreement to develop the site, Futrell added.

Oyster Point is close to Genentech’s Gateway Boulevard campus and about six miles north of the San Francisco International Airport. The area is home to one of the two marinas under the San Mateo County Harbor District’s purview, and serves as a terminal for the San Francisco Bay Area Water Emergency Transportation Authority commuter ferry. Oyster Point also boasts a 30-room boutique hotel and restaurant, yacht club, ofﬁce space, and public park.

The site is owned by South San Francisco, and has been managed by the harbor district since 1976, under a joint powers agreement expiring in 2026.

Brennan has fought to bring greater transparency and efﬁciency to the district’s operations, and made some enemies along the way. But the specter of possible closure has prompted discussions about whether South San Francisco should seek to end its management agreement with the district and assume direct control over Oyster Point’s operations.

Tightening environmental laws soon ended the trash burning, and the submerged lands east of the original Oyster Point were used as garbage dumps until 1970.

The landﬁll’s growth eventually moved the shoreline 3,000 feet east of its original boundary. And while the trash was capped before land was built on top of it, Brennan said environmental standards of the day did not require barriers underneath the waste heaps or on their sides. 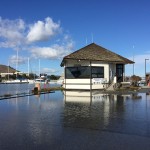 Although it would be illegal to build on the site without ﬁrst removing the trash underneath a development’s future footprint, Brennan claims the possibility of lateral movement could enable buried waste to enter the Bay, and she believes pockets of methane gas could also pose a safety hazard.

Brennan noted parts of Oyster Point, including the marina, were ﬂooded during a Nov. 25 king tide event, and the San Francisco Bay Regional Water Quality Control Board has informed city ofﬁcials they must provide short and long-term ﬂood mitigation strategies.

Futrell rejected the idea Oyster Point poses a pollution or safety risk, noting its ground water and air quality are constantly monitored. “If anything were leeching into the site, we would know it,” Futrell said. “This is a beautiful 57-acre site, much of it green space that will remain green space even after any development,” the city manager added, “No one in their right mind could characterize it as any kind of a toxic hazard.”