To: Chairman Wong, Vice-Chair Kalfin, Mr. Faria, Ms. Lujan, Mr. Martin, Mr. Nagales, and Mr. Ruiz.
Thank you for reading my words; particular thanks to Mr. Faria for inviting me to be part of the process. My topic is the proposal for the “Ford Properties Residential Development” by Miller Cypress SSF, LLC which is on tonight’s agenda to be considered for approval.

I am excited! Development on the former Ford sales site is getting underway after being stalled for years by – among other things – legislated change. The years the site lay vacant may have contributed to an increase of nearby criminal activity, and certainly created a poor welcome for the people in the thousands of automobiles entering SSF from the 101 freeway every day. I am equally thrilled by the implicit promise that the city will finally undertake long-promised work on the Cal-Train station (instead of using that site as a general materials dump and parking lot). I am NOT excited, however by many elements of tonight’s proposal; and ask you to think carefully about some of those elements.

I do not denigrate Sares Regis – though I feel they’re more solicitous of their investors than of their tenants, and favor tenants over neighbors. They appear to have acted with the market in a generally compliant manner. I would not exchange my present home for one of the crowded, ill-lit, and high-priced units they offer at The Plaza in Foster City, or 888 North San Mateo – but I am not the target for those “multifamily” apartments.

None of the proposed apartments will be affordable housing. Construction on Parcel D replaces the 20+ SRO rooms of Christy’s Inn at 309 Airport Blvd. That building has been closed since a fire on 9/9/2015. Rents on studio units in the proposal are expected to be 3-4 times what rents were in Christy’s. We can assume new tenants will be very different in character than current residents of the surrounding neighborhood.

I briefly complain that providing only 330 parking spaces for the 500-600 residents of the 264 apartments (mostly car-owning adults), far from the city’s major groceries, drugstores, and many other important retail/service locations is a disaster.

I have three material issues with the proposal:
1. increased city services cost will be placed on existing residents;
2. the effects of the construction process is entirely overlooked.
3. traffic along heavily-used Airport Boulevard and Miller will substantially increase; 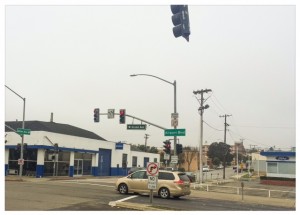 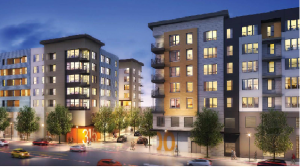 [1] History says adding 500+ new residents to any neighborhood generates friction, particularly when the characters of the old and new residents differ widely. When the extant neighborhood is a high-crime area, tensions will be greater. And, if there is an on-going ‘flash point’ (such as on-street parking), there will be constant calls for extra community services (police, fire, EMT, cleaning, &c.). If the $6 million Sares Regis offers as a “community benefit’ could be invested at 5%, the income would only provide 2 full-time positions to service 24/7 problems. It can’t be invested. The per-capita cost of city services will likely rise, and be a burden on current residents.

[2] I work in San Francisco, seeing disruption caused by construction city-wide since 2000. Streets get blocked to vehicles and pedestrians, street parking is curtailed, noise increases to unbearable levels, unanticipated construction accidents temporarily shut off water and electricity, dirt and dust increase incidence of respiratory distress (and housekeeping). The Ford project is outsized for SSF. All the above outcomes can be expected during the year-plus required to build these towers, yet the proposal offers no means of mitigation. Effects will be felt by (and may become an economic burden on) residents, nearby merchants, and motorists.

[3] The rendering below, from the Report to the Commission, shows the intersection of Miller and Airport, facing west. It was slightly ‘stretched’ on its horizontal axis in the report (makes the buildings appear shorter) but I have re-scaled it to be more correct. I place next to it a photograph of the same intersection (taken January 20, 2015 at 09:30); I tried to get a low-traffic interval so detail can be seen.

You’ll note the eight-plus traffic controls visible in the photo were eliminated in the rendering. An east-facing photograph of the same intersection (below) shows the most important reason for the controls: 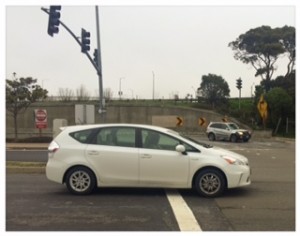 In the rear of the photo you see the termination of the Grand Avenue exit from US 101. Thousands of vehicles emerge from this exit every day, many headed to business facilities on East Grand Avenue. The Hexagon study (commissioned by Sares Regis and incorporated in the report) concludes that traffic conditions at several intersections will become unacceptable after the Ford development is occupied. Mitigations were recommended without identifying what they should be, how much they would cost, and who will pay for them. Again, these are likely to become a burden on current residents.

Therefore, I ask the Commission to defer making a recommendation to the City Council until the staff can explore the three areas I have just identified. In particular, I hope they work to make specific the nature and cost of mitigations for these problems, and get a proposed construction schedule including traffic and service disruptions. I suggest the Commission to consider increasing the amount of the community benefit payment required, and agree to a specific schedule for funds to be made available.

Thank you for allowing me to address the Commission and to ask my questions today.

The SSF Planning Commission Meeting Public Hearing on this item will take place Thursday January 21, 2016 at the City Council Chambers at the MSB 33 Arroyo Drive SSF. The meeting will start at 7pm.

More information can be found on the City website including this below. CLICK HERE for more info. on the agenda & staff notes. Quick partial view on ESC CLICK HERE

If this is the first time you have been to a Commission meeting, perhaps you’d like to know a little about our procedure.

Under Oral Communications, at the beginning of the meeting, persons wishing to speak on any subject not on the Agenda will have 3 minutes to discuss their item. The Clerk will read the name and type of application to be heard in the order in which it appears on the Agenda. A staff person will then explain the proposal. The first person allowed to speak will be the applicant, followed by persons in favor of the application. Then persons who oppose the project or who wish to ask questions will have their turn.

If you wish to speak, please fill out a card (which is available near the entrance door) and give it, as soon as possible, to the Clerk at the front of the room. When it is your turn, she will announce your name for the record.

When the Commission is not in session, we’ll be pleased to answer your questions if you will go to the Planning Division, City Hall, 315 Maple Avenue or telephone (650) 877-8535 or by e-mail at web- ecd@ssf.net.

1 comment for “An Open Letter to the South San Francisco Planning Commission at their January 21, 2016 Meeting”