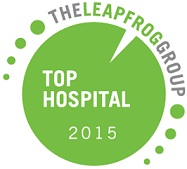 The Leapfrog Group announced its 2015 Top Hospitals, a coveted list of hospitals that performed at the highest levels, nationally, based on Leapfrog’s quality and safety standards, considered the most rigorous of its kind.
More than 1600 hospitals report on those standards through the annual Leapfrog Hospital Survey and the results are publicly reported for use by Leapfrog’s constituency of employers and other purchasers, as well as their employees and the public at large.