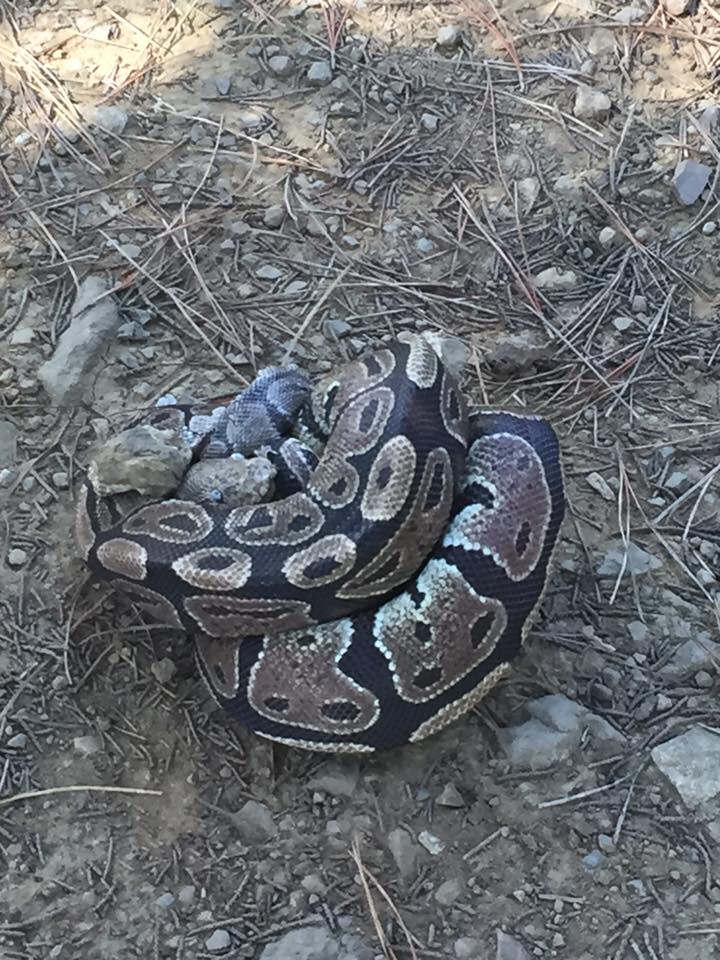 OK so who let their python loose on #SignHill? Thanks to Angelique Presidente as she posts “Thank you to the Peninsula Humane Society & SPCA for responding so quickly and rescuing this small Python from the Iris Hill Trail today. Please note: If you do not want your pet, surrender it, do not just leave it somewhere to fend for itself, that snake would of died being out of its habitat.”
About Pythons -Pythons are non-venomous constrictor found in tropical and subtropical Asia, Africa, and Australia. They were introduced into USA, South America, and Europe as pets. In Florida, pythons have escaped captivity and are a nuisance in Everglades where they are becoming far too abundant.

Some of the comments this post brought about from neighbors:

Sarah D: I’m glad they did the right thing and turned it in instead of killing it! It is a ball python, absolutely harmless!

Stephanie S: I’m glad someone found him before it started getting too cold outside!

Jo H: How cruel to just leave the snake! I don’t like snakes, but they have just as much rights to survive in a safe environment as we do!

Sal L:It’s a ball python not like the ones from the everglades these lay eggs and not by the hundreds. And only get around 5 ft. But definitely shouldn’t be up in those hills. I found a rubber boa in the San bruno mountain’s. Gotta educate them before they have everyone thinking that 16ft pythons are up on the hill. Lol I’m not saying there isn’t because they’ve been found before near sf. But as long as the price is cheap and people lack education when they buy them from the pet store they’ll be let go in the hills .

Maggie N;poor baby python – to be abandoned like that. So glad it was rescued.