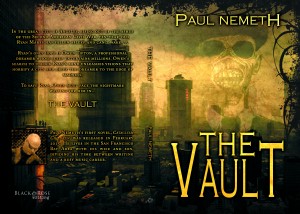 South San Francisco is very fortunate to have author and musician Paul Nemeth living amongst us, having moved here from Colorado, Nemeth has now published his second book, The Vault. His first book, CATACLYSM CHILDREN, has been well received and we look forward to continued success for Nemeth.

In addition, Nemeth has a very intriguing blog in which he covers many subjects including immigration, encounters with our finest in blue – SSFPD, impact of violent movies on youth, teachers and guns and a host of other topics of the day that find relevance in our local and global society. Follow him HERE.

In the great city of Angeles, rising out of the ashes of the Second American Civil War, ten-year-old Ryan Mares has fallen asleep and can’t wake up. Ryan’s only hope is Owen Tipton, a professional dreamer whose sleep entertains millions. Owen’s search to unlock Ryan’s mind unleashes visions that horrify a city and drive the dreamer to the edge of madness. To save Ryan, Owen must face the nightmare waiting for him in…THE VAULT.

To see the trailer for THE VAULT CLICK HERE

How I Got The Idea For “The Vault”

Posted on December 6, 2015 by Paul
Sometime around 1981, when I was eleven years old, I bought Alan Dean Foster’s novelization of the movie Alien.

It started with an interesting sequence, something not contained in the movie or in any version of the script that I’m aware of (in all honesty, I haven’t read any of the movie’s scripts): The following is the introductory paragraph of Foster’s Alien:

You must understand that they were not professional dreamers. Professional dreamers are highly paid, respected, much sought-after talents. Like the majority of us, these seven dreamt without effort or discipline. Dreaming professionally, so that one’s dreams can be recorded or played back for the entertainment of others, is a much more demanding proposition. It requires the ability to regulate semi-conscious creative impulses and to stratify imagination, an extraordinarily difficult combination to achieve. A professional dreamer is simultaneously the most organized of all artists and the most spontaneous. A subtle weaver of speculation, not straightforward and clumsy like you or I. Or these certain seven sleepers.

Of them all, Ripley came closest to possessing that special potential…

The first three pages of Alien talk about the now-famous crew of the Nostromo and how they’d fare as professional dreamers. Foster spends so much time expanding on something not part of the Alien universe that I wonder if it was something he’d thought about on his own for a separate book.

And, it planted a seed that, thirty-some years later, motivated me to write a short story called “The Nightmare Man” which appeared in a bogus Craigslist hijack called Scary Stories, and finally in a legitimate short-story anthology, Nightscapes, from my first publisher, Stonegarden Publishing.

I thought about the type of person who could dream for a living and came up with Owen Tipton. Owen lives like a rockstar, but his inner life is much different than his public persona. In my mind, he’s Sting from the earliest era of the Police: cocky, cerebral, and haunted all at the same time. He’s a savant who doesn’t understand why he’s able to do what he does, which makes it all the more disturbing when he loses power over his dreams…which gain power until he’s almost destroyed by them.

About the author: Born in Colorado, Paul Nemeth now resides with his wife and son in South San Francisco, CA. When not writing, he is active in the Bay Area music scene playing lead and bass guitar while teaching music at several schools on the Peninsula including our own Bronstien Music Store on Grand Avenue.

Nemeth’s books are vailable at your local bookstore, or order through Amazon, Barnes and Noble, or other online retailers. Available for Kindle, Nook, and other e-reader formats.