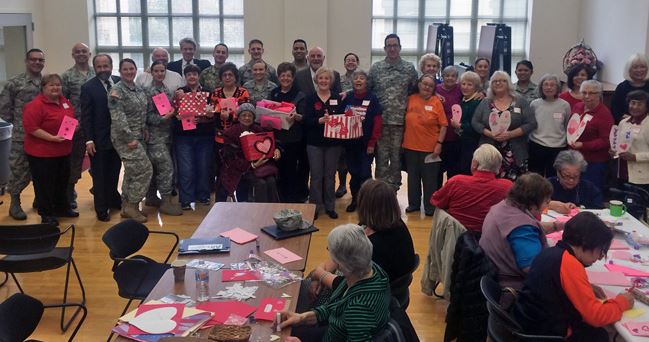 Twelve hundred members of the California National Guard’s 129th Rescue Wing and 40th Combat Aviation Brigade deployed to the Middle East and Africa received valentines made by senior citizens and supporters of the Magnolia Center as part of a community crafts project with Senator Jerry Hill. 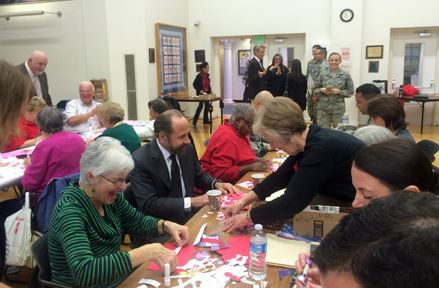 “Thanks to you, these citizen soldiers from all over California who are far from home know that their service and their sacrifices are appreciated, and that they are remembered on Valentine’s Day,” Hill told the senior citizens and staff of the Magnolia Center during their crafts project day on January 29.

Expressing thanks on behalf of the deployed service members, California National Guard Colonel Darrin Bender said the warm wishes from the community and their handcrafted cards touch the hearts of people who are far from home and their families. “They are grateful to be remembered,” he said.

Now in its eighth year, the annual crafts project has made a name for itself among California National Guardsmen. Each year, the seniors have steadily increased the number of valentines they make, widened the circle of community members joining in the fun and have welcomed more visitors in uniform from the Guard and the Mountain View-based 129th.

They also start early. Fueled by a catered breakfast courtesy of the Unity Lutheran Church, the Magnolia seniors and their visitors took up scissors, paste, glitter and stacks of construction paper to put the finishing touches on the valentines that overflowed two large boxes and bags. 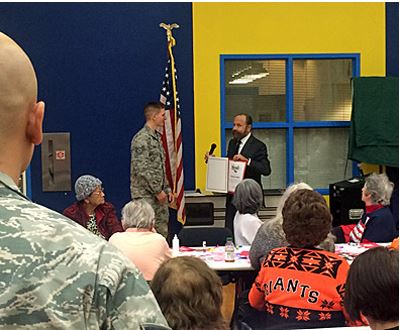 This year, said Lieutenant Jorge Barriere of the 129th Rescue Wing at Moffett Federal Airfield, the visitors wanted to do something special to show their appreciation: They arranged to hold a swearing-in ceremony at the center for Staff Sergeant Parker Imrie, an avionics tech support worker for the 129th who has been selected to train as a helicopter pilot and is expected to be commissioned as a 2nd lieutenant in the spring after completing training.

Bender did the honors and Imrie, who also received a California Senate certificate of recognition from Hill, told the seniors, “I’m thankful — we’re thankful – for the strong support we receive from this community.”

Imrie and Barriere credited the 129th’s recruiter, Technical Sergeant Kevin Centinaje, with the idea of bringing the ceremony to the seniors’ valentines crafts day. “What could be a better place?” Centinaje said of the event and South San Francisco, which happens to be his hometown.

The seniors’ valentines were sent to about 200 members of the 129th Rescue Wing, who were deployed to the Middle East and the Horn of Africa.

UPDATE: To see the response from the 129th Rescue Wing CLICK HERE