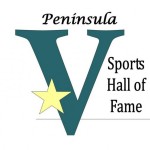 The Hall of Fame, founded in 1989, honors sports figures who have had an impact on the Peninsula athletic scene and beyond.

The Hall of Fame induction banquet is presented annually by the San Mateo County/Silicon Valley Convention and Visitors Bureau, headquartered in Burlingame.

The Hall of Fame is located at the San Mateo County History Museum in downtown Redwood City. Currently, there are more than 250 members of the Hall of Fame.

For more information, contact the Convention and Visitors Bureau at 650-348-7600.