Did you know? Rue Randall Clifford, born in 1887 in San Francisco, came to South San Francisco with a mission to enrich the lives of others and left a lasting legacy.

+ “Cliffie” as she was called, was the first member of the South San Francisco High School faculty, hired in 1913. In her 43 year career she taught English, music, glee club, and staged school plays. She introduced many new classes, namely, journalism and public speaking. Outside of the classroom, Cliffie was an avid sports fan. She never missed a high school football game and was named honorary coach. She formed the first track teams and also served as track coach for boys and girls. Her brainchild, the “Clifford Katie”, was awarded to students who proved their athletic prowess. Now you know how Clifford Field at SSF High School got its name!

+ In 1914, Miss Clifford traveled South San Francisco by horse to obtain signatures from every resident for a Carnegie grant to build the Grand Avenue Library. The library was built in 1916 and she served on the Library Board for 37 years, but it is the West Orange Library that is dedicated to her.

+ During World War I, Cliffie sold Liberty Bonds, entertained at camps and knitted for the Red Cross. During WW II, she served as house mother to homesick soldiers at the U.S. Hospitality House at Grand and Linden. 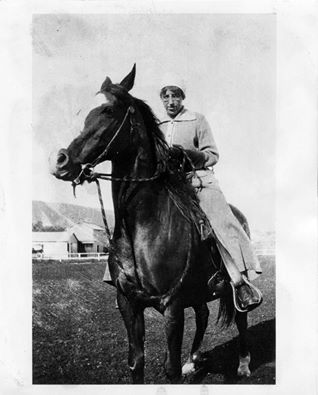 This photo, circa 1940, courtesy of South San Francisco Public Library, shows Cliffie on horseback, her preferred method of transportation.