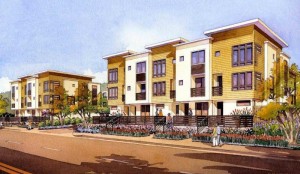 The developer, City Ventures, began initial grading and site work in late 2015 – however the project was paused for an extended period of time due to a construction incident on November 26, 2015. The retaining wall of an adjacent house (1243 Edgewood) failed and most of the side yard collapsed. The City responded immediately, stopped construction at the site, and red-tagged the home.

Throughout this process, the City’s role has been to make sure City Ventures is complying with the “Conditions of Approval” for their project and that they are carrying out the project in a safe manner. When the construction incident happened, the City acted immediately to stop all construction until the City’s safety concerns were fully addressed. Once the developer complied with all of the City’s requirements, the City was obliged to allow the project to proceed.

The project is anticipated to be completed in early 2017.

This project, located on the corner of Spruce and El Camino is set to begin demolition and site prep work in April. The developer has been issued permits for demolition and site preparation work, and they are now in the process of selecting a demolition contractor. Construction should start by July. The completed project will include 285 apartment units on the upper floors, with 220,000 square feet of retail on the ground floor. Safeway will reopen in the new project, and other retailers include Ross Dress-for-Less , a fitness club, and several shops and food retailers. UPDATE: demolition has been postponed to August 2016 with this project expected to be complete in 2 years 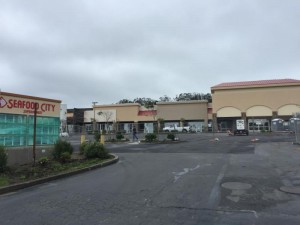 The second phase of construction is set to be complete this April!

Last year, the City approved plans to modernize and expand the existing shopping center at the corner of Callan and Westborough boulevards. The first phase entailed remodeling the façade of the main building for the new “Seafood City” grocery store and construction of a “lifestyle” food court. The second phase entails building a new 7,000 square foot retail area on the north side of the property. The remodeled center will include Seafood City, Red Ribbon, Jollibee, Valerio’s Bakery, Chowking, and other specialty shops. 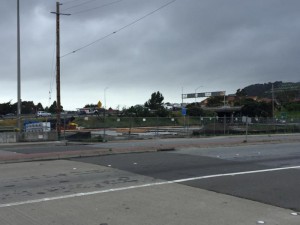 The foundation work for the new retail building at 180 South Airport Boulevard is nearly complete. Currently, the Building Division is reviewing the tenant improvement plans for Chipotle Mexican Grill. In 2015, the property owner and developer received approval to construct a new 5,507 square feet retail building with associated parking and site improvements at 180 South Airport Blvd. The tenants will also include Starbucks and Which Wich Superior Sandwiches. Which Wich Superior Sandwiches is an American fast casual restaurant chain specializing in sandwiches and salads. It currently has 343 locations open in 37 states across the US, six locations in Mexico City, and locations in Guatemala City, Panama City, and Dubai.

The Cove at Oyster Point 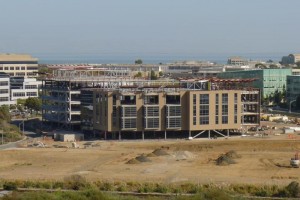 HCP has broken ground on the second phase of The Cove at Oyster Point (“The Cove”), its newest life science development located in South San Francisco. Currently, cranes are up on the first phase of the project (Buildings 4 & 5) and grading and foundation work is underway at the AC Marriot Hotel. For the second phase of the R&D campus, the developer has already submitted applications for a building permit to construct the two buildings (Buildings 1 & 2) and the parking garage. When complete, the Cove will be a one million square foot, fully integrated, waterfront campus located on Oyster Point Boulevard in South San Francisco. The campus design consists of seven buildings ranging in size from 115,000 square feet to 182,000 square feet in both single- and multi-tenant building configurations. It will be a pre-certified LEED Silver project featuring 5.5 acres of outdoor green space and a state-of-the-art 30,000 square foot amenity center, which will open in the third quarter of 2016, including food service, fitness, meeting space, as well as retail and a future on-site hotel.