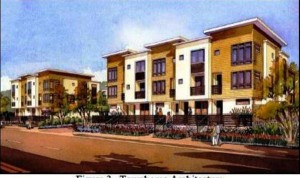 This 1.7 acre site will be home to 35 townhomes with 7 units reserved for moderate-income households.

1256 Mission Updated:
The developer, City Ventures, began initial grading and site work in late 2015 – however the project was paused for an extended period of time due to a construction incident on November 26, 2015. The retaining wall of an adjacent house (1243 Edgewood) failed and most of the side yard collapsed. The City responded immediately, stopped construction at the site, and red-tagged the home.

Throughout this process, the City’s role has been to make sure City Ventures is complying with the “Conditions of Approval” for their project and that they are carrying out the project in a safe manner. When the construction incident happened, the City acted immediately to stop all construction until the City’s safety concerns were fully addressed. Once the developer complied with all of the City’s requirements, the City was obliged to allow the project to proceed.

The project is anticipated to be completed in early 2017.