Vincent Ward- Actor. Portrayed the character “Oscar” on The Walking Dead. “Bo” on The Starter Wife.

Land of the Lost (Cast Reunion): Wesley Eure “Will Marshall” & Kathy Coleman “Holly Marshall”.
Wesley Eure was also “Micheal Horton” on Days of Our Lives and the killer in “Toolbox Murders”.

Casey Leonard- Artist. Specializing in hand-drawn charcoal portraiture. She currently works independently and for Chuck Jones Gallery/Warner Brothers. Casey has also done art design and photography for theater, including the Broadway show Rain: A Tribute To The Beatles. Casey’s Wizard of Oz series and Gone With The Wind artwork is currently on sale at the Chuck Jones Gallery.

Bring your items to get signed by our guests or purchase items at the show to get signed as there we be a plenty! Get original art from our comic guests & artist alley patrons or pay for a commission of your favorite characters.
Brought to you by some of the fine folks that help put on Big WOW! Comic Fest, East Bay Comic Con, Bakersfield Comic Con, BakAnime, Reno/Sands Comic Con, Mouse Con, Pasadena Comic Con and Silicon Valley Comic Con! 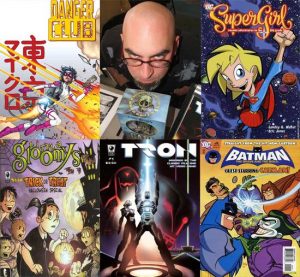 Landry Walker- Comic Creator, Writer. Landry Walker currently saw his Star Wars: Tales from a Galaxy Far, Far Away: Aliens Vol.1 HC see release! This anthology of six stories puts the spotlight on some of the minor and background characters from the recent “Star Wars The Force Awakens” film. Landry is also the co-creator (with artist Eric Jones) of the Image Comics hit “The Danger Club”. Landry has also written a number of alternative comics published by Slave Labor Graphics (SLG) including Little Gloomy & The Super Scary Monster Show (which was picked up for a 52 episode animated series titled SCARY LARRY, airing in France), Tron: The Ghost In The Machine and X-Ray Comics. He was a regular contributor to Disney Adventures Magazine with his Kid Gravity comic and also wrote the novel “Frozen: The Phantoms of Arendelle”. He is known for his 2009 mini-series Supergirl: Cosmic Adventures in the 8th Grade, and has written for the Batman: The Brave and the Bold comic series, DC’s Red Lanterns, Casper’s Scare School, The Joker’s Asylum: Mad Hatter , Dean Koontz House of Odd GN, Eerie, Marvel Super Hero Magazine, Dr. Who: Seeds of Destruction Web Comic, Filthy Habits, Dan Brereton’s The Nocturnals, The Incredibles comic series, and on the current Teenage Mutant Ninja Turtles comics, magazines and New Animated Adventures. Walker is also a contributing writer for the gaming website Elder-Geek. His book “Danger Club” is Lord of the Flies with superpowered kids: The greatest do-gooders fly off to space to take down an antagonistic force but they don’t come back, leaving the youngsters to take care of the planet — or destroy it. You take a culture of teenagers, separate them from their adult counterparts, and watch them struggle to re-create the societal structure they were raised in — a culture of violence without any of the temperament that comes with age. 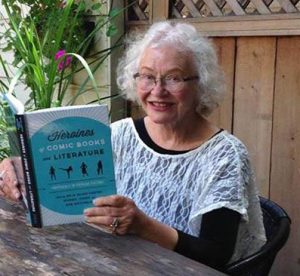 Here is another Local Talented Guest we are very happy to Announce. Lets give a South City Comic Con welcome to San Francisco’s very own… TRINA ROBBINS.
Trina Robbins comics artist, writer, and herstorian, has been writing and drawing comics, books and graphic novels for over 40 years. She is the acknowledged expert on the history of American women cartoonists and has written many books on the subject. She has collected the work of early 20th century women cartoonists Tarpe Mills, Lily Renee, and Nell Brinkley. Trinaâ€™s first comics appeared in the East Village Other, and later in Gothic Blimp Works. Her comic book It Ainâ€™t Me, Babe, released in 1970, was the first in the world of comics, created exclusively by women’s hands. Starting in the 1980s and 1990s, Trina Robbins has contributed several series of comics about Wonder Woman. In 2013, Trina was elected into the Will Eisner Comic Book Hall of Fame.