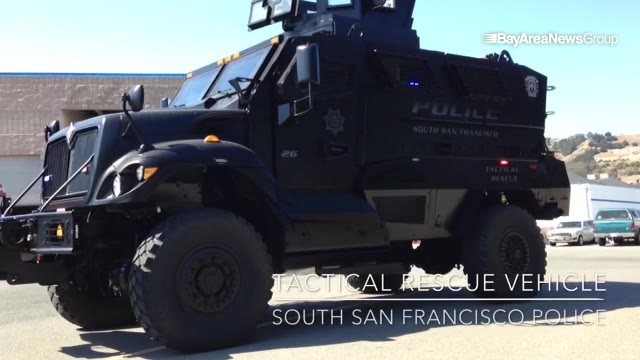 South City resident Mark Johnson shared some links on our Facebook page about the award winning documentary ‘Do Not Resist’. This film has won Best Documentary Feature at the 2016 Tribeca Film Festival.  “SSFPD acquired its own MRAP a while back. You may want to read this article/watch the film to learn about the militarization of police departments.” Johnson writes as he shares the link to the film and questions “Does SSF really need assault teams?”

Johnson shares Dexter Filkins‘ May 13th article in The New Yorker, which includes this overview (for full article CLICK HERE)

“Do Not Resist” shows a city-council meeting in Concord, New Hampshire, during which the members vote overwhelmingly to accept a two-hundred-and-fifty-thousand-dollar federal grant to buy a BearCat armored vehicle from a private supplier. (Concord, population forty-two thousand, has recorded two murders since 2004.) During the debate, a resident holds up a sign that reads, “More Mayberry, Less Fallujah.” Another Concord resident tells the council members they’re making a mistake: “Terrorism works because it makes people irrational and it makes them destroy themselves.”

The Director of the film, CRAIG ATKINSON had this to say about his film:

“In April 2013, I watched the police response in the days following the Boston Marathon bombing in awe. I had never associated the vehicles, weapons and tactics used by officers after the attack with domestic police work. I grew up with the War on Drugs era of policing: My father was an officer for 29 years in a city bordering Detroit and became a member of SWAT when his city formed a team in 1989. What I wasn’t familiar with, since my father’s retirement from the force in 2002, was the effect the War on Terror had on police work. Making this film was an attempt to understand what had changed.

Knowing that interviews with experts would do little to communicate the on-the-ground reality of American policing, we instead set out to give the viewer a direct experience. We attended police conventions throughout the country and started conversations with SWAT officers at equipment expos and a seemingly endless cascade of happy hours, offering the only thing we could: an authentic portrayal of whatever we filmed together. On more than one occasion, we were on our way to the airport, camera in hand, only to receive a phone call from our contact in the police department instructing us not to come. Our access seemed to be directly tied to the amount of negative press the police were getting at that time. It became increasingly difficult to get access after the events in Ferguson, and there were many times we thought we would have to stop production altogether. The urgency of the situation, however, motivated us to continue.

We noticed a trend in early 2014 of police departments being solicited by technology companies offering new tools to help alleviate dwindling operating budgets and loss of personnel. One technology provider we filmed with offered the same IBM platform the NSA uses to collect web communications to police departments, for as little as $1,000 per year. Throughout 2014 and 2015, we watched as departments throughout the county adapted the technologies without any guidelines or policy directives governing their use. At times, the companies would make the chief of police sign a nondisclosure agreement preventing them from telling their communities they even had the technologies. The mantra we would continue to hear was that the police couldn’t let terrorists know the tools they were using to intercept their plots. The problem is, in three years of filming police, there was never an opportunity to use the equipment on domestic terrorism. Instead, the military surplus equipment and surveillance technology were used on a day-to-day basis to serve search warrants, almost always for drugs.

In hindsight it’s not hard to understand how we arrived at the current state of policing in America. Since 9/11, the federal government has given police departments more than $40 billion in equipment with no stipulations on how it should be deployed or any reporting requirements. Additionally, the federal government created a loophole that allowed police departments to keep the majority of the money and property seized during search warrants to supplement their operating revenue. If a police department makes a portion of their operating revenue from ticketing citizens or seizing their assets, then police officers become de facto tax collectors. We met many officers who said they didn’t sign up for that.

Everyone wants to know what my father thinks of the film, and in all honesty, I think it pains him. It’s hard to watch the profession you dedicated your life to evolve into something completely unrecognizable. During the 13 years my father was on SWAT from 1989-2002, his team conducted 29 search warrants total. Compare that to today, when departments of a similar size we filmed conducted more than 200 a year.

As we begin to share the film, the overwhelming response from audiences has been shock and disbelief. I can say that we were just as shocked while filming the material. Going in, we had no idea what we were going to find. We kept thinking we were creating opportunities to film with departments that would show the full spectrum of the SWAT experience, but time and time again, we found ourselves inside homes searching for things that we never found. It’s my hope that both community members and officers working hard to challenge the culture of policing within their departments use this film to illustrate the dire need for change.”