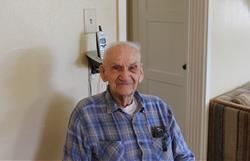 What’s the secret to a long, happy life? Just ask South San Francisco resident Raymond Bagley. Ray, as he is known among family and friends, celebrated his 100th birthday on Sunday, June 6th. It’s not every day that you meet someone that has seen life transform over the last century. The City had a chance to chat with Ray, his son Bill and his neighbor Pam. These are his reflections on South San Francisco.

Ray was born and raised in Minnesota in 1916. He worked on the family farm with his parents and siblings. Eventually, warm weather and job prospects called Ray away to Southern California where he joined the U.S. Navy. After an honorable discharge from the Navy, circa 1940, Ray made his way to San Francisco to start work on the development of the South San Francisco neighborhood we know today as Brentwood.

Ray was a master plumber, a trade he learned while in the Navy. He worked in just about every house, installing plumbing systems, pouring the foundations and even helping homeowners move in to their new Brentwood digs.

Ray put his plumbing skills to work for New Mission Plumbing and Heating on Hillside Boulevard and eventually went on to work for Atlas Heating and Ventilation on Cabot Road. “I was always a good worker,” says Ray. After years of commuting from San Francisco to South San Francisco for work, a house in the neighborhood he helped to build, caught his eye. The cost? A cool $10,000. He and his wife bought the house on Wildwood Drive in 1950 and raised their family there. Ray and his son Bill live there today.

What brought you to South San Francisco?
Parking! In San Francisco, even back then, parking was scarce. I was overjoyed to have a garage of my very own to park my car.

What is one of your favorite memories of South San Francisco?
Since I grew up on a farm, I always enjoyed being active in my backyard planting fruits and vegetables and such. But, I cut back quite a bit after getting a letter from the water department some years ago.

One thing I’ll always remember is how neighborly and kind everyone is here. Over the years, if you started a project or needed help, you’d look around and see about five people standing right there to pitch in and help out.

What is one piece of history that you think most people don’t know about when it comes to South San Francisco?

Everyone here has been kind over the years. The people here are different than other cities. I have a good neighbor in Pam Gradney right across the street.

What do you think is the “best kept secret” of South San Francisco?
In the old days we had to take our own stuff to the dumps, there was no garbage collection. I would take so much stuff! Nowadays there are limits on what you can and can’t take.

What is your favorite thing to do in South San Francisco?
“My wife and I would walk to Tanforan and catch the horse races, we loved to do that often.”

Today, Ray spends most of his time in his favorite seat in the house gazing out of the window in his living room, catching a ball game on TV or watching Karyl Matsumoto and Mark Addiego on the PEG channel. Saturday night is family dinner night at the Bagley house, with dinner made by his son, Bill. Spaghetti is often the meal of choice as it is Ray’s favorite. His grandson Robert, his favorite neighbor Pam and other friends like to gather for family dinner night and for barbecues and cookouts on warm days and on holidays to spend time with Ray. And, sometimes, Bill will fire up the organ and play Ray’s favorite songs.

What do you want other people to know about South San Francisco?

“He is the epitome of his generation. Straight talking, hardworking and honesty are the foundation of his character. I’m proud to call him my neighbor,” Pam Gradney says of her neighbor Raymond “Ray” Bagley.
Thank you for helping to build and shape South San Francisco, Ray Bagley. We wish you the very best on your 100th birthday!

To read more about our neighbor Ray Bagley CLICK HERE