The San Mateo County Harbor District’s focus is shifting towards the needs of the community. This is why I ran for a seat on the Harbor Commission.

I’ve worked hard and made measurable progress while serving my first term. I’m happy to report that significant change has been accomplished and more is in progress; with new management in place we’re becoming a well-run District. In 1976, when I was age 8, the District borrowed millions of dollars from the California Division of Boating and Waterways. In April 2016, the Harbor District repaid those loans. As board President I created the Finance Committee and I’m very pleased that the District is debt free for the first time in 40 years.

In May 2016, I organized a Sea Level Rise & Erosion Forum that included speakers from the U.S. Geological Survey and the U.S. Army Corps of Engineers. Over 175 people including city, county, and state representatives packed the Douglas Beach House to the rafters! We’re fortunate to live in an area with an engaged electorate and strong leadership. In June 2016, our County Supervisors included $2.6 million in their approved budget specifically for erosion protection for businesses, Coastal Trail access, and homes near Mirada Rd. in Half Moon Bay.

In May 2015, we moved the District’s headquarters back to the Coastside, within sight of Pillar Point Harbor. In July 2015, the board unanimously approved the District’s first Code of Ethics & Values. In August 2015, President Mattusch and I were the first commissioners from our District to receive special district governance awards for completion of the California Special District Association Leadership Academy. 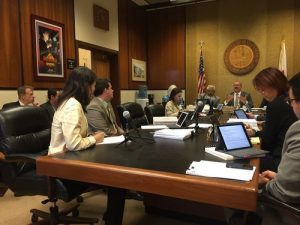 A cynical 2016 Civil Grand Jury report instructs the County Board of Supervisors to “look beyond” the Harbor District’s significant performance improvements. The report provides no relevant information about Oyster Point Marina but it advises Supervisors to weigh in on early termination of the Oyster Point Marina/Park Joint Powers Agreement between the City of South San Francisco and the Harbor District. The report contains factual inaccuracies and makes no mention of the June 1, 2016 development agreement between the City of South San Francisco and Greenland USA, an international developer based in China. As proposed, a biotech business park would be located on the Oyster Point Landfill, a site that is currently managed by the Harbor District. The project includes 2.25 million square feet of new office space, new roads, removal of existing roads, and may include a new hotel. A June 23, 2016, San Francisco Examiner article provided some insight into the Cities plans, “City Manager Mike Futrell noted Greenland is going to re-cap all of the landfill, including in places where no construction is planned.”

The Grand Jury report also omits the Cities 2016 flood protection plans for the Oyster Point Landfill. Environmental reports indicate that the old clay cap should be replaced; recurrent flooding may cause contaminants to migrate into the Bay through poorly constructed mud berms. On May 27, 2016, Tetra Tech, consultants for the City, produced a flood protection report focused on landfill subsidence mitigation and sea level rise projections. The report discusses the City/County Association of Governments (C/CAG) interest in forming a Joint Powers Authority (JPA) to address sea level rise and it concludes that Oyster Point Landfill flooding is a regional issue. It appears that Measure AA has been identified as a possible funding source for flooding caused by landfill subsidence. 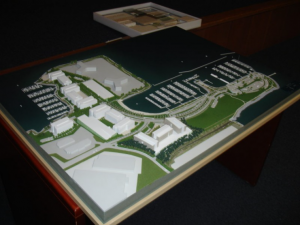 Oyster Point Landfill was in operation from 1956 to 1970. The landfill does not meet Title 27 regulations because it was built prior to state regulations. Consistent with landfill practices at that time, no liner was installed at the site. Waste disposal design features such as liners, cellular division of waste, and leachate collection systems were not installed. Instead, the waste materials were placed directly onto the Bay mud.

Around 1976, the closure of the City-owned landfill prompted local officials to make a deal with the Harbor District to obtain long-term funding for marina operations and improvements. In 1977, South City and the Harbor District entered into a Joint Powers Agreement (JPA) that terminates in 2026. The JPA resulted in countywide property tax funding the City owned facility. Historically, Oyster Point Marina operating costs and capital improvements exceed operating revenue. The shortfall is funded by countywide property tax.

Pillar Point Harbor is one of the few commercial fishing ports in California and it’s owned and operated by the Harbor District. It’s located in an unincorporated area of the county; the District’s Harbor Patrol provides search and rescue emergency response, tenant occupancy rates are consistently high, and it’s the only harbor of refuge from Santa Cruz to San Francisco. The beautiful Half Moon Bay location provides ocean-dependent recreation and a local source for sustainable seafood. A strong case can be made for funding Pillar Point Harbor emergency response, repairs and improvements with countywide tax dollars. Maintaining a decades-old commercial fishing harbor in need of TLC is like owning a boat—things are always breaking and maintenance is required.

In 2015 the Commission adopted board norms and a new culture began taking shape, based on three values: respect, integrity, and equality. The Harbor Commission is moving in a positive direction, and with change comes creativity, innovation, improved accountability, opportunities to evaluate and define long-term goals, and the need for greater cooperation.